Driverless Cars Are Inevitable And Necessary

Our nation’s highways are teeming with automotive gridlock. Everyday commuters are backed up bumper-to-bumper, many of whom are driving alone to and from work. Public transportation is either unavailable, inconvenient or frankly just too awful to be a viable option for many.

Traffic is a serious problem. It compromises our safety, damages an already fragile environment and hinders us economically.  And continuously expanding our roadways to get another lane of traffic isn’t going to solve it.

But imagine a scenario where we are able to share cars that pick us up at our house, and whisk us off to work while we check our morning emails.  Microsoft has researched predictive analytics that would ensure passengers have a seamless entry and exit to their daily commute, and that the most efficient routes were always chosen.

This is the potential of the driverless automobile, the ambitious and disruptive technology that Google and many other automotive giants are pushing forward with rapid fervor.

But not everyone is excited about the prospect.  Like many innovations, late adopters tend to be critical of technology in the beginning and often misapply the utility rationale for the new developments. F

or example, much of the purported reasoning for autonomous vehicle technology is safety. Although safety is required to a new standard with autonomous vehicles for obvious reasons, this is not the only reason for the development of driverless cars and really misses the point.

This premise ignores the economic, utility, and environmental factors that are pushing these advancements. Autonomous vehicles are the obvious inevitable step in the evolution of American transportation, and they solve many issues that compound our transportation problems, most notably, traffic.

Innovation is the product of necessity, and along the way there will always be resistance. The car was originally resisted because many people didn’t understand the need to move away from the horse. And beyond those who benefited from a reduction in saddle sores, the automobile catalyzed the airplane, made radio technology advance for in-dash availability as well as trucks.

We can take the example all the way to satellites and rockets. My point here is that it’s impossible to foresee the spin-offs that innovations will have, and when innovation is created out of a need, it’s merely the first ripple.

It’s easy for critics to reduce  this innovation to a fancy and needless development. However, driverless cars present a real and necessary step towards the solutions to many of the problems that plague our nation’s transportation infrastructure; not to mention the problem of distracted drivers in this modern age where our displays and our gadgets are competing for our attention.

It is true that if we were to become reliant on driverless autos, it might make us less experienced and perhaps more dangerous drivers in the event that we are forced to actually take the wheel ourselves.

After all, Americans certainly became less adept at riding their horses after the introduction of the automobile over a century ago!

But it’s quite likely that uninterested amateur motorists would simply chose to let their robot friend do the piloting, and the fact that there might occasionally be uninterested and unskilled drivers behind the wheel isn’t really a change from the current situation, is it?

The other consideration that driverless auto skeptics point out is that a shift to robot drivers will cause something crucial to be lost: driving is fun!  And it’s certainly true that the freedom of the open road and the pleasure that comes from driving a powerful automobile across our nation’s byways is distinct slice of Americana that nobody wants to see eliminated – but there’s no reason for that to ever be eliminated.

Driverless automobiles needn’t replace pleasurable joyrides, instead it will replace the drudgery of bumper to bumper commutes. This is the logic behind Volvo’s Concept 26.

In reality, it will only increase our ability to enjoy the freedom of “cruising” by diminishing the ways in which we are day-to-day slaves to our cars.

What do you think of driverless cars? 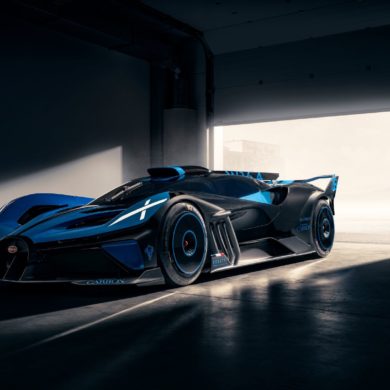 Enjoy This Incredible Gallery of Over 20 Bugatti Bolide Photos!