The sedan wars are heating up, and the new 2015 Acura TLX has just been added to the mix of four-door athletes. TLX is all-new for 2015 and has the unenviable job of replacing two cars in the Acura lineup, the TSX and TL. TLX is positioned between the compact ILX and the flagship RLX. The new 2015 Acura TLX comes with lots of luxury and new technology that puts it at the top of the class against the competition. Step inside the TLX cabin, and it has a nice mixture of luxury and a sporty feel. The first thing we noticed when we started up the new luxury sedan was the Push Button shifter. It took a while to get used to pulling a lever to shift into reverse and drive, but after we got used to it, it was a nice feature. The cabin is roomy, and the leather seats were extremely comfortable as we commuted to Denver this week. We noticed the cabin was quiet and a comfortable place to spend time, even in traffic. We settled in and got comfy during the extreme cold with the heated seats.

The high-tech dual-screen electronics interface in the Acura TLX leaves much to be desired. It took us 45 minutes after we got underway to figure out how to work the heater. The temperatures were below zero on this day, and it was frustrating, to say the least. We found its functionality very confusing and difficult to figure out. The room in the back is good, and cargo capacity, access, and flexibility are much improved over the outgoing model’s thanks to a larger, wider trunk opening, a flat cargo floor, and new 60/40 split-folding rear seatbacks.

Our TLX tester came with the 3.5-liter V6 that produces 290 horsepower and 267 pound-feet of torque. The direct-injected aluminum V6 uses Variable Cylinder Management (VCM), which deactivates three of its six cylinders for improved fuel efficiency when lightly loaded. When teamed with SH-AWD, it also has a fuel-saving idle-stop feature. TLX V6 gets an EPA estimated 21/31 city/highway fuel mileage. The 3.5-liter powerplant comes mated to a new 9-speed automatic transmission. 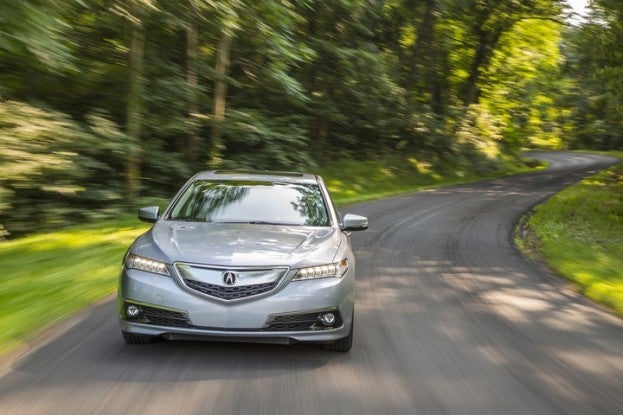 On the highway, the all-new TLX luxury sedan is both smooth and quiet. In the tight corners west of Denver in the mountains, TLX delivered crisp and agile handling, and with the SH-AWD, all four wheels stayed firmly planted for sure-footed driving dynamics. This new sedan was very enjoyable to drive in all driving situations and left us feeling rested even after a long commute.

The TLX came with the Advance Package that features Collision Mitigating Braking System with Head-Up Warning, Road Departure Mitigation System, Adaptive Cruise Control with Low-Speed Follow and front and rear Parking Sensors. The safety system worked well and was a welcome feature as we navigated through Denver’s heavy traffic during the week. It kept us out of trouble numerous times on 6th Ave through tight and narrow lanes in a congested construction zone. The all-new 2015 Acura TLX 3.5L SH-AWD will be a competitive new entry into the mid-range luxury sedan segment. It offers plenty of luxury, technology, and driving performance to satisfy any entry-level luxury sedan buyer. The driving dynamics with SH-AWD are superior, and the TLX delivers in replacing two cars from the Acura lineup. Definitely take a look at the TLX if you are in the mid-size luxury sedan market.