If you are following news of a Land Rover Discovery concept vehicle being readied for a New York International Auto Show debut later this month, you might have noticed the integration of the world “Vision” into the show platform. Thinking this world merely represented what would be a “vision” for the company’s future design path, Land Rover has now unveiled new technology that has provided a new perspective on the concept vehicle’s name.

Land Rover is publicly announcing a new technology called Transparent Hood (or Transparent Bonnet in the European press release) as part of the Discovery Vision Concept. Land Rover’s Transparent Hood delivers a previously inaccessible view of the road ahead through the hood area.

You might be thinking, where is the engine and wheels that are typically found under the hood? The answer is the hood of the Land Rover is not actually transparent. The entire Transparent Hood is actually an optical trick made possible with grille-mounted cameras and an advanced display system located inside the vehicle. Capturing the image of the road, Land Rover’s Transparent Hood is transmitted to the driver and occupants as a depiction of the underside surface through augmented reality. A sophisticated Head-Up Display provides an accurate and well-defined augmented reality presentation of potential obstacles virtually over the hood surface. In the span of almost 25 years of limited use in automobiles, Head-Up Display could be heading for a golden age. With the Land Rover Transparent Hood, we are being made aware Head-Up Display technology can do so much more than just show the speed of the vehicle. 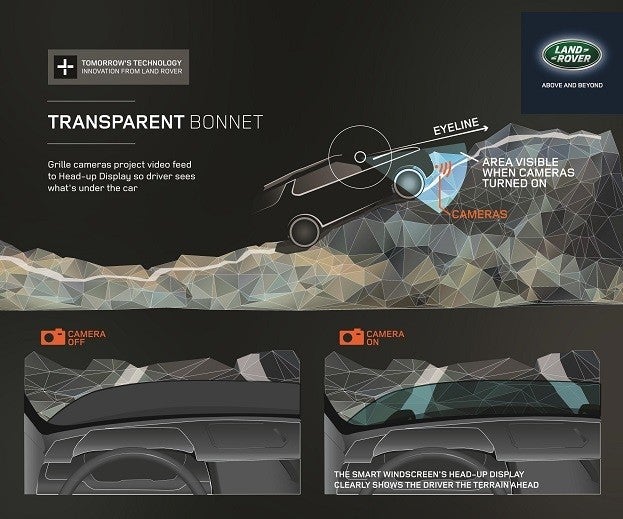 In Land Rover’s traditional off-road environment, the Transparent Hood can grant drivers the additional vision to evade dips or rocks that could damage the vehicle. The Transparent Hood will deliver a greater amount of information to aid climbing steep inclines and navigating tight paths. This technology is also certain to be popular in urban habitats where Land Rover’s modern luxury vehicle customers live. Parking the larger sport utility vehicle through parallel or front-entering maneuver could be performed with greater ease.

Land Rover has said the Discovery Vision Concept will be highly representative of the next production version of the Discovery (known as the LR4 in North America). As for the Transparent Hood technology, Land Rover has made no guarantees for when the system will be equipped on showroom vehicles. Offering a glance into the mindset of the British premium utility vehicle brand, Director of Research and Technology for Jaguar Land Rover Dr. Wolfgang Epple has commented, “As our vehicles become more capable and offer increasing autonomy off-road, we will ensure the driver has the confidence to progress over any terrain.”