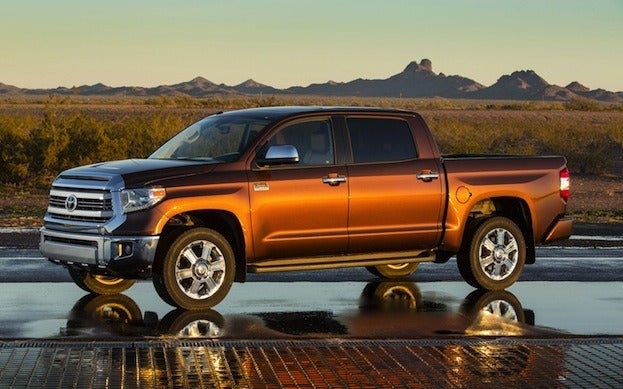 Toyota pickups have come along way since the first Toyota Stout was sold in the U.S. in 1964. The Stout was a homely beast with a windshield that looked like it was off an old Chevy pickup, and a cab that looked like it was salvaged from International Harvester. 50 years later we’re looking at the 2014 Toyota Tundra full-size pickup that will compete with Ford, Dodge, and GM. This week we’re testing the 2014 Tundra 1794 Edition model that is loaded with all the goodies.

What’s the best way to test out a new pickup truck? The best test of a new truck can be when you take two buddies along who have never driven a Toyota pickup before, and one is a diehard Ford fan and the other loves GM. This new Toyota Tundra is the most impressive truck Toyota has produced this far. It’s called the 1794 Edition and comes loaded with all the bells and whistles you can imagine. The full-size 2014 Toyota Tundra is fairly impressive in standard trim, but the new 1794 is another animal altogether. 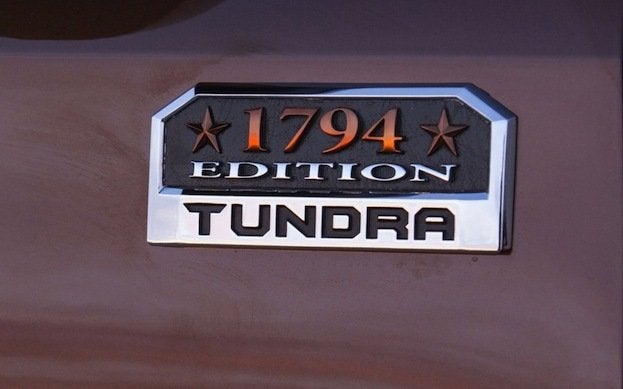 The 2014 Toyota Tundra 1794 Edition is named for the ranch property on which the Tundra’s San Antonio assembly now sits. This beauty is aimed at the competition – Ford’s “King Ranch” and Chrysler’s “Longhorn” urban cowboy pickups. And Toyota has squarely aimed their sights at the U.S. truck market that has been dominated by Ford, GM and Dodge. They may just have hit the target in the bullseye.

The Toyota Tundra 1794 Edition follows the typical plush cabin route with saddle brown embossed leather, full amenities and ultra-suede trim. This truck is as comfortable as any on the market. This tester was a four-door Crewmax with a 5.7-liter V8 that powered the full-size truck down the road and up the mountains with no effort at all. I took the “boys” out to lunch to see what they thought of the new Toyota luxury pickup. It would take a lot to impress these two seasoned pickup owners. Doug is a big 6’4″ retired oil man from Arkansas who drives a 2013 Ford King Ranch diesel. John stands 6’3″, a Colorado bred factory worker, who swears by his three quarter ton 2013 GMC Silverado. I knew it wasn’t going to easy to impress them. So we took a trip up I-70 for a little jaunt into the mountains. Both these guys were dully impressed and said they had no idea a Toyota truck could be this impressive.

They were both impressed with the interior cabin comforts and the amount of legroom in the front and back. I pushed the big pickup hard up I-70 at altitude and showed them just how much power the V8 Tundra 1794 had with all the extra trim and extra weight it had to lug around. Even with the extra weight of the three of us, we effortlessly hit 80 heading west out of Denver. They were both a little surprised to say the least.

The 5.7-liter V8 pumps out 381 horsepower with 401 lb. ft of stump-pulling torque.  And the big V8 is even flex-fuel approved. This 1794 Edition tester ($49,715) was decked out with 4WD, a 5’5″ double-walled bed, bigger chrome clad wheels 20-inch wheels, running boards and Blind Spot Monitor with Traffic-Cross Alert. It was loaded with goodies like heated/ventilated leather seats and premium JBL sound system. 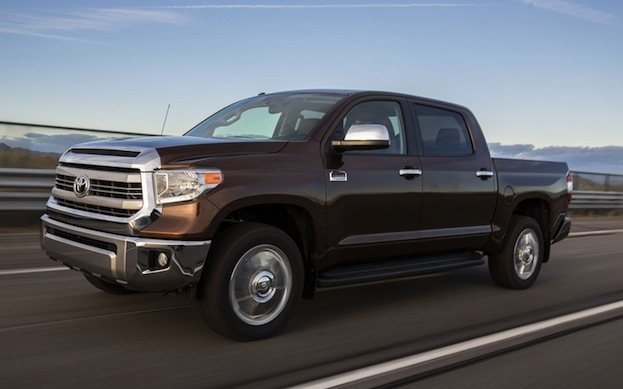 Besides the 1794 Edition, Tundra comes with changes to the chassis that include refinements to shocks, steering and noise and vibration reduction. The 2014 cabin is more driver friendly with controls that are easier to reach, instruments easier to view, and a new data screen has been added. Bluetooth and a rearview camera are now standard on every Tundra.

Front and rear bumpers have been changed to new three-piece designs, a good idea as they are prone to scraping and bending with typical pickup abuse. The tailgate now features a built-in spoiler and the Tundra name stamped in rather than decaled on. Exterior mirrors and rear lights have small aerodynamic fins for stability.

The all-new 2014 Toyota 1794 Edition Tundra is built in Texas and dully impressed a Ford “King Ranch” and a die-hard GMC pickup truck owner. There really isn’t much else that needs to be said, and I can’t think of a better endorsement than these two guys for this full-size Toyota pickup. 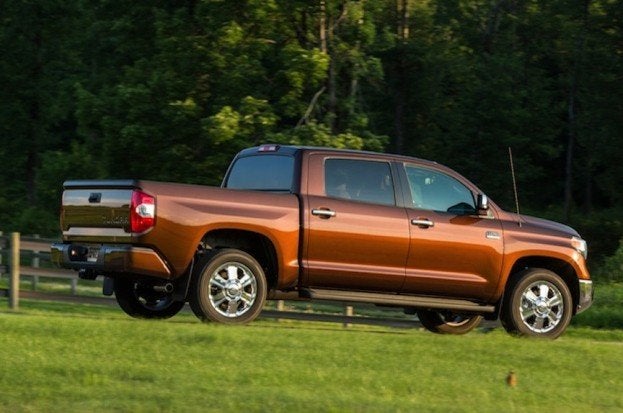