Lexus is not resting on its proverbial laurels with the new 2014 IS250. They can’t afford to when they’re trying to keep up the Germans who’ve held such a tight grip on the performance sedan market.

The luxury sport sedan segment is the most competitive market in the automotive world. That’s because automakers who have the best sports sedans are viewed by the auto world as having the best cars.

It may not be fair, but most automotive journalists who write reviews are performance car fans. We like to drive, and we like cars that will perform to the edge of the performance envelope. It’s just a fact.

Bring on the newly-designed 2014 Lexus IS250 AWD sports sedan and we’ll take it for a test drive.

Lexus has moved the IS into true sports sedan status for the 2014 model year. The IS250 gets a rear-wheel drivetrain to go along with the updated exterior look and a number of new technology goodies. For the first time, the IS can hold its own against the German sports sedans on the curves and track alike.

Lexus engineers changed the whole driving dynamics of the IS with a new rear-wheel-drive platform. They used technologies from the Lexus LS chassis like additional bracing for added strength and adhesive bonding that shaves off more than 20 pounds from the previous generation model. 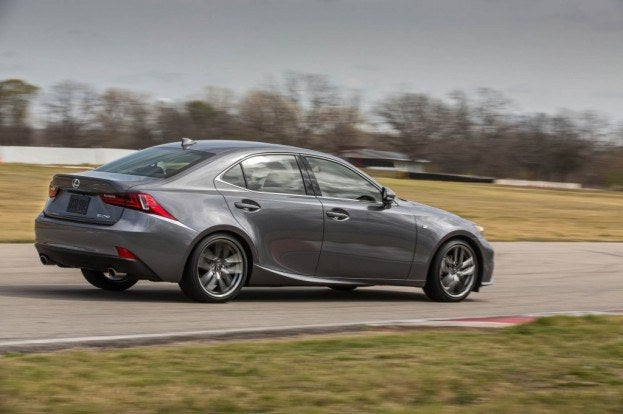 hen we took the new IS250 out on the winding roads from Morrison up to Evergreen, CO, we could feel the suspension updates that made the ride stiffer. But this extra stiffness translates into reduced body roll and less leaning in the tight curves over the outgoing model.

We were able to take 25 mph curves at 45 with no problem. The IS stayed flat and all four wheels remained planted. This Lexus IS250 tester came equipped with the optional AWD powertrain and it worked flawlessly as we pushed the sedan through the corners. The 2014 Lexus IS also uses a new multi-link rear setup that makes a noticeable difference.

Additional performance goodies include a new all-electric power steering unit with a revised lower gear ratio and improved steering feel. The four-wheel discs have also been upgraded for better performance and stopping ability. We did a few quick stops while taking the fast corners and the IS responded like a sports sedan should. There was no fading and the new sedan stayed on line.

The 2014 Lexus IS250 is powered by a 2.5-liter V6 engine that makes 204 horsepower and 184 pound-feet of torque. The 2.5-liter has more power than expected for its 204 hp. The 6-speed automatic transmission shifted in the right spots and got the most out of the smaller displacement engine.

The automatic gearbox in the IS250 features three selectable modes that auto-adjusts throttle control, steering and fuel management to suit the drivers need. We could choose between Eco, Normal and Sport. For a sport sedan, the Sport mode was ideal for the spirited driving we did during the week. Sport uses Lexus’s G-force Artificial Intelligence (G AI-Shift) technology that selected the perfect gear. We used the standard steering wheel shift paddles that come on all IS models for manual shifting. 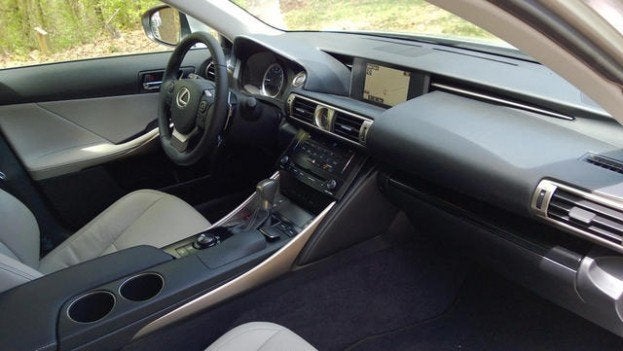 Inside, the IS250 is comfortable and sporty. A new steering wheel comes with buttons that control a driver information display, audio functions, Bluetooth, the voice recognition system and more. The seats are well-bolstered and comfortable and kept us from moving around in the corners. The cabin grew a bit over the previous generation in the front and feels roomy enough. In the back, rear legroom was improved but still feels tight.

The ride was relatively smooth considering the sport-tuned suspension and there was some road vibration especially on rougher pavement.

Overall, the 2014 Lexus IS250 is a fun, sporty ride and Lexus had taken a big step forward in being competitive with the German sports sedans.

On winding roads, our IS250 tester handled the curves and off-camber turns with ease. The six-speed automatic transmission was smooth and shifted in the right spots. The 2014 Lexus IS is a driving enthusiast’s car. Its electronic aids and easy drivability will make anyone feel like a better driver, on or off the track. 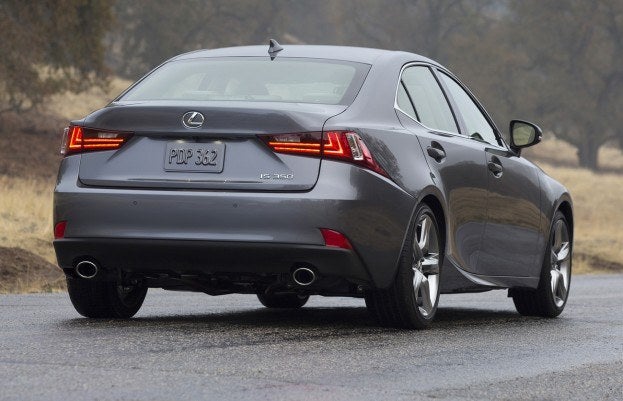