Are you looking for both luxury and performance? The Germans dominate the luxury performance segment but Lexus is making a strong argument with the newly updated Lexus IS350. This week we’ll be testing the latest luxury performance IS sedan from Toyota’s luxury brand. This 2014 Lexus IS350 comes equipped with AWD and that will allow us to see how this beauty performs in wet and dry conditions.

It is beautiful in a bold way and gets a new hourglass-shaped front spindle grille that first debuted on the latest-generation GS flagship. It also features new LED daytime running lights that look like Nike swooshes that sit below the headlamp clusters. The big news for performance fans is the IS now rides on a new, rear-wheel-drive platform. This is a must if any car is going to be considered a true performance vehicle. The Lexus IS now moves into true performance car status.

The chassis gets new underpinnings with additional bracing and other technologies like adhesive bonding which reduces the 2014 Lexus IS’s weight by more than 20 pounds over the outgoing model. The new third-generation gets a new multi-link rear suspension setup that helps reduce body roll in the corners. It also features a revised gear ratio to the all-electric power steering and improved steering feel. The brakes have also been upgraded at all four corners for better performance. Inside, IS models come with a new instrument panel design, including a revised climate control panel that uses electrostatic controls for the temperature. NuLuxe polyurethane seat material now comes standard which Lexus says holds its shape over time better than leather.

This 2014 Lexus IS350 AWD tester ($41,700) is powered by a 3.5-liter direct-injection V6 that pumps out 306 hp and 277 lb.-ft. It’s mated to a six-speed automatic with steering wheel paddle shifters. It will sprint from a standing start to 60 mph in 5.6 seconds making it fast enough to get in serious trouble on the street. This test driver had to keep his head on a swivel the whole week. Fuel economy estimates are 19/26 mpg city/highway with AWD.

On the twisty turns near my home in Evergreen, our IS350 AWD tester handled the sweepers and off-camber turns with ease. The all-wheel drive worked well and kept all four wheels firmly planted while making quick turns. The suspension is firm in the Lexus IS350 but still felt relatively smooth. Let’s face it, people who buy this car are looking for sporty driving dynamics, not a soft cushy ride. The six-speed automatic transmission was smooth and the paddle shifters worked flawlessly for spirited driving. The new third-generation luxury sport sedan had plenty of acceleration and low-end power whenever it was needed. The new rear-drive configuration was refreshing and the new IS350 feels like a true sports sedan now. Rear-drive with AWD is what most performance automakers are going to and the IS benefits from the new configuration. Kudos to Lexus for making the needed change. The updated brakes are firm and didn’t fade after a few quick stops. The revised electric power steering worked as advertised and felt crisp while providing nice feedback.

Inside, under acceleration, the engine sound is piped into the cabin for a nice exhaust note that tells you this is a performance car. Otherwise, the cabin is quiet and is comfortable like you would expect from a Lexus product. The IS350 is a car that will let you push the boundaries, but it doesn’t get out of hand. It has a refined but sporty driving dynamics that will suit most performance buyers. It has a good weight distribution at 54/46. 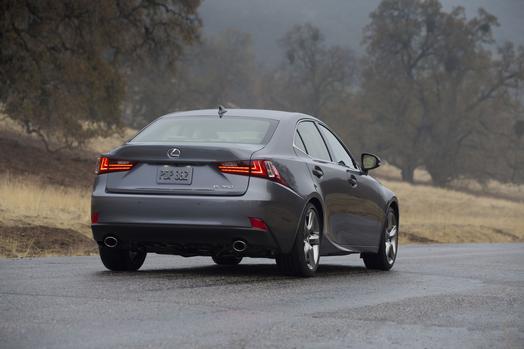 This writer thinks Lexus has hit a home run with the all-new next-generation 2014 IS350. The 2014 Lexus IS is definitely a driving enthusiast’s car now that it comes with a rear-drive setup. Its bold new styling along with sharper driving dynamics make it an engaging drivers car. Add in all the electronics we’ve come to expect in luxury cars, and the 2014 Lexus IS350 AWD will hold its own and competes well with the German sport sedans.

If you’re looking for something a little bit better on fuel and cheaper, check out the 2014 Lexus IS250.