The 2013 Super Bowl has wrapped in suspenseful style on Sunday night. As the Baltimore Ravens won the NFL’s greatest prize by fending off the San Francisco 49ers in the second half of the big game, the 34-31 victory was a battle worthy of its hype. On Monday, the winner of the Super Bowl’s most prestigious MVP Award was joined in the presence by another winning persona that was recently revealed at the 2013 North American International Auto Show in Detroit.

At the 2013 Barrett-Jackson Collector Car Auction, the rights to the first production example of the 2014 Chevrolet Corvette Stingray was purchased by NASCAR superteam owner Rick Hendrick for $1,100,000. After a dramatic 47th Super Bowl in New Orleans, another high-profile future owner of North America’s most enduring sports car was part of the spoils awarded to one member of the winning Baltimore Ravens.

Honoured with Super Bowl XLVII’s Most Valuable Player (MVP) Award, Ravens’ quarterback Joe Flacco claimed a prestigious trophy named after the long-standing NFL commissioner Pete Rozelle. In addition to the Tiffany & Co silver Pete Rozelle Trophy, the 2013 Super Bowl MVP was granted with the future keys of a 2014 Chevrolet Corvette Stingray. Made possible by Chevrolet’s official sponsorship of the 2013 Super Bowl MVP Award, the presentation of a 450-horsepower 2014 Corvette Stingray will be the ultimate pleasure machine for a football player like Flacco to experience during the NFL off-season. 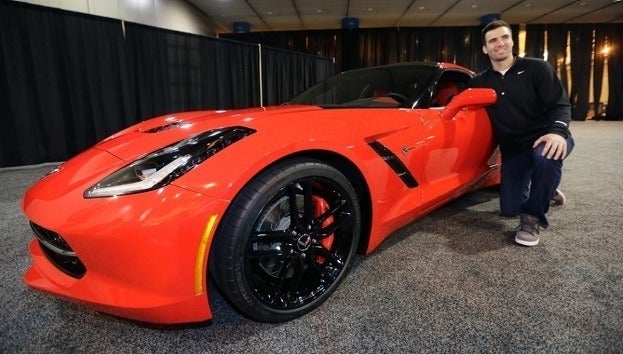 A more recent tradition has been Chevrolet‘s involvement in the MVP Award after the big game. Super Bowl XLV MVP Aaron Rodgers received a Chevrolet Camaro Convertible while Eli Manning was granted a 2012 Corvette GS last year based on his award-winning performance on the gridiron. This year’s awarding of the 2014 Corvette Stingray also served as a way to document a story of a Chevrolet dealership’s recovery. In 2005, Banner Chevrolet was one of many businesses devastated by the effects of Hurricane Katrina. After suffering heavy damage and the loss of their 770-vehicle inventory over 7 years ago, Banner Chevrolet has since rebuilt and the auto group’s chairman Rick Flick awarded the 2014 Chevrolet Corvette Stingray to 2013 Super Bowl champ Joe Flacco.

Joe Flacco should expect to receive his own personal 2014 Corvette Stingray sometime this summer. Therefore, it is very possible that the new sports car will be found around Baltimore Ravens training camp for the next NFL season.