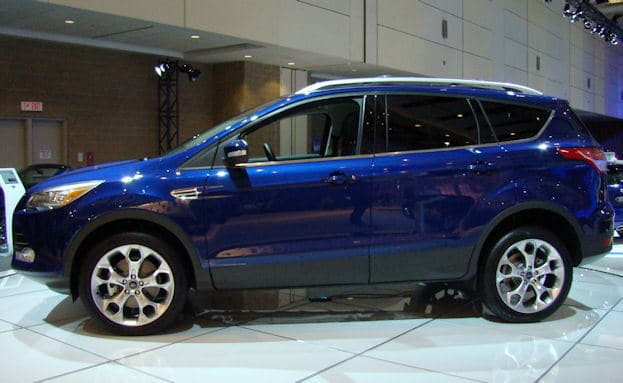 Officially going on sale this month, the 2013 Ford Escape reinvents the pivotal small utility product offering from the blue oval brand. With only about a week available to driving customers, the 2013 model year vehicle has to manoeuvre itself through a safety recall.

The problem necessitating the recall for over 8,200 newly produced 2013 Ford Escape relates to pedal clearance issues that could result in motorists having trouble controlling the speed of the crossover vehicle. The concern is the positioning of carpet padding around the center console could be pushed into a path that disrupts access to the brake pedal. With the mis-positioned carpet padding’s interference, there is the possibility that a driver may only make contact with the side of the brake pedal. Potentially increasing stopping distances, this safety defect can increase the chance of an accident for 2013 Escapes.

This safety concern with the 2013 Ford Escape has some similarities to the floormat issues connected to unattended vehicle acceleration with Toyota products. While other attributes have been and continue to be a linked to the Toyota product line, we are now aware as consumers how the smallest detail of a vehicle can become fatal. There have not been any reports of accidents resulting due to the defective carpet padding on the 2013 Escape vehicles.

The voluntary recall filed with the NHTSA is said to affect 8,266 all-new Ford Escapes. Free of charge, Ford service centers will replace the left-front carpet padding with an improved panel. 2013 Ford Escape owners will be contacted and scheduled to receive the recall service on or after July 23rd.

With the 2013 Ford Escape recall being one of several high profile, high-volume new vehicles linked to safety-related issues, the compact utility vehicle joins the Chevrolet Volt, Chevrolet Malibu, Lexus GS 350 and the Porsche 911 as products shaken by early issues. The streak of recalls coming from American automakers recently may stoke concerns that the Detroit Three are falling into the bad habits of decades past. Even today, American vehicles were sometimes reflected as being unreliable due to a series of poorly built, recklessly designed products through the 1970s and 1980s. Despite the fact that today’s domestic branded automobiles are revealed to have roughly equal reliability, the perception remains that American vehicles are functionally inferior. In reality, it could probably be foreseeable that the all-new crop of automobiles and their owners could be burdened by technical hiccups.