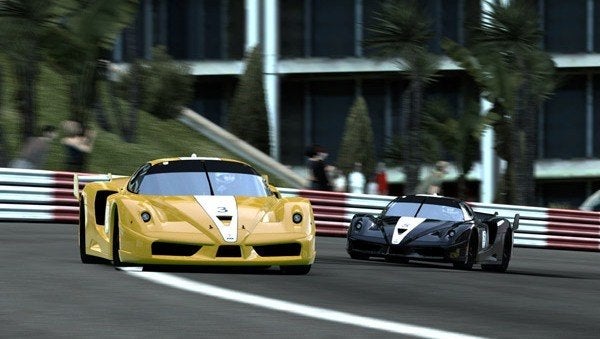 We’re pretty big fans of racing video games over here at Automoblog, and it just so happens that Atari is releasing its newest version of the popular Test Drive series – Test Drive: Ferrari Racing Legends – which will be released in May on the PS3 and Xbox 360. You can preorder the game on Amazon right now for only $40.

Some very famous tracks will be in the game, including Monza, Ruen, Silverstone, Monaco, and Road America, among plenty others. The cars, as you would expect, are very detailed inside and out, including visible engines and gearboxes.

Atari just officially revealed all of the Ferraris available in the game, a total of 50. They will be split into three classes: GT, which includes most of the cars including the F50, Enzo, F430, 360 Modena, and Dino 246 GTS; Sport Class, including the racing versions like the FXX, F40 Competizione, and 330 P4; and Monosport, including the full racing cars like the modern F1s back to the good ol’ 125 F1 from 1948. The full list is below, but please scroll to the bottom to see renderings of each car.

Table of Contents show
1. List of Cars
2. Images for all 50 Cars

Images for all 50 Cars