The purpose of a preview concept (unless the car it is previewing is not far out) is to test public reaction. In the case of Bentley’s EXP 9 F, the reaction from the automotive press and Geneva Motor Show goers was near-unanimously negative.

That isn’t the way you want a pivotal new product line to be received. As such, it is back to the drawing board. Aston Martin experienced a similar reaction with the Lagonda concept, a vehicle that was widely panned. Can only Land Rover do British SUVs right? Thankfully, the Lagonda has never seen the light of day. 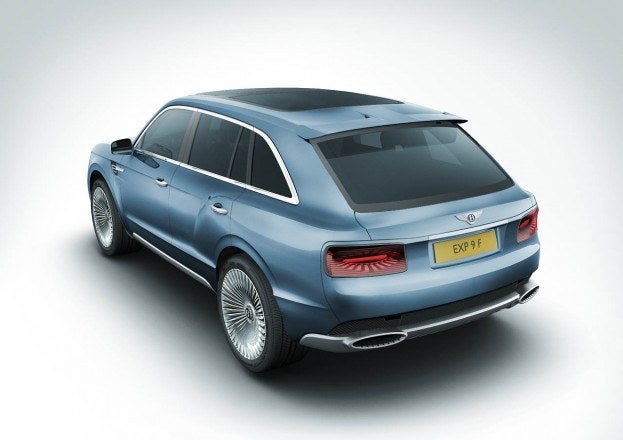 With Bentley looking to expand its sales though, producing an SUV is still the plan – it just will look different than the EXP 9 F. According to a source with What Car? the new, high-riding Bentley will offer “more traditional SUV proportions and less retro surfacing…the large round headlights and foglights will remain, but the headlights will be slightly smaller and set farther inward.” The proportions though are not what needs fixing; they’re pretty unique and we like that. The worst design element of the EXP 9 F was the combination of the too-large headlights and fog lights, which will continue.

Fog lights that are nearly as large as the headlights is an idea that clearly needs to be ditched. The part about the retro surfacing is interesting too. The EXP 9 F’s design seems as if it is from another era – and we aren’t entirely sure which one either. It definitely isn’t the thoroughly modern, Continental-inspired design most of us expected.

Instead of a dynamic design like the Continental range, Bentley appears to be positioning the SUV in buttoned-up Mulsanne. territory. According to What Car?, the all-but-official SUV is on track for a launch date in 2015. It’ll be fun to watch if Bentley tries testing public reaction again with another preview concept closer to debut.