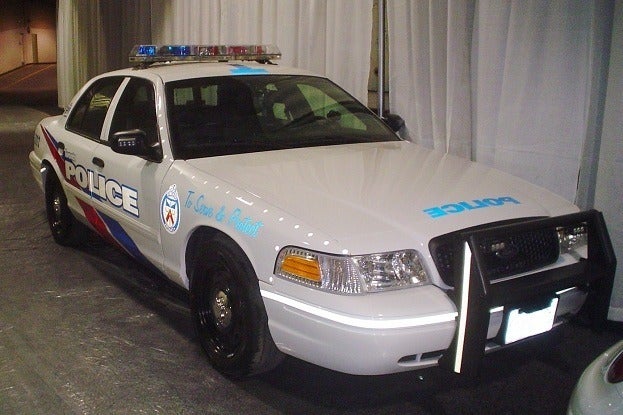 A staple of law enforcement and taxi services since the 1970s, the last, new Ford Crown Victoria left the St Thomas Manufacturing Plant September 15th. Arguably, as the final Crown Victoria model rolled out of the Canadian auto plant, the story of one of the most significant Ford Motor Company products comes to an end. Like the Model T, Mustang and F-150 pickup, the Ford Crown Victoria abundant presence on North American streets was pivotal to the Blue Oval brand.

Ford inaugurated the Victoria name in the early 1950s as an upscale vehicle model. In 1955, the Crown Victoria name was created as a showcase with a two-door coupe. Recognized for an acrylic glass roof called a Skyliner, the first iteration of the Ford Crown Victoria sold for two years with little fanfare. The Crown Victoria name was reinstated in the late 1970s as Ford attempted to classify two vehicles with the ‘LTD’ moniker. The large car cemented itself into the Ford Motor Company during the 1980s as the auto company was reacting to the changing American motorist. Introducing the Ford Taurus sedan for the 1986 model year, the auto manufacturer planned to phase out the mighty Crown Victoria in favour of the more modern designed vehicle. However, with demand remaining hot for the Ford Crown Victoria, the larger old-style car initially outlasted the Taurus.

A massive redesign of the Ford Crown Victoria in 1992 promoted a more aerodynamic shape and the 4.6 liter Modular V-8 engine. Initially sales of the new Crown Victoria was so strong in the retail market that fleet production was delayed. As time went on, Ford’s focus changed drastically in the sales of the large car. By the end of the 1990s, average automotive customers favoured sport utility vehicles over larger, the Ford Crown Victoria dealership sales plummeted. While the similar Mercury Grand Marquis remained in retail production for less than a year before the demise of Mercury. After the discontinuation of the Chevrolet Caprice (a very popular law enforcement vehicle through the 1980s and early 1990s), the Ford Crown Victoria stood as the top police car for North America. Popular for the old school construction, Ford made few changes to the beloved police interceptor since 1998. Unavailable directly to the public since the 2008 model year, the Ford Crown Victoria’s production for the past 4 years have dealt exclusively with fleet customers.

With the Ford Crown Victoria production ended, the sight of the monstrous sedan is still going to be commonplace when hailing for a cab or when keeping on the right side of the law. The solid ladder-type chassis as well as the tried and tested 4.6 liter Modular V-8 engine insures the current Crown Victoria will serve a long life. In preparation for the phasing out of the Crown Victoria, Ford has created the purpose-built sedan called the Interceptor in order to preserve the company’s lucrative police business. Ford has also unveiled a sport utility law enforcement vehicle based on the Explorer. When it comes to Taxi service, Ford Motor Company is now billing the passenger version of the Transit Connect van as a tailor-made product.

Connected to the past, the Ford Crown Victoria may be forever known as a symbol to how automobiles used to be built. Whether the change is viewed as a good thing or bad thing, the Crown Vic’s years of service is a storied workhorse that has contributed to Ford Motor Company’s impact on the lasting automotive landscape of the United States.