Designing small cars with the artisanship most automakers have reserved only their large, higher margin vehicles, Mazda could be viewed as a trendsetter in North America. Mazda has ahead of Ford and Chevrolet who are only now realizing the personality available in compact designs. Unafraid to be unique at the risk of disturbing conventional car buying habits, the Japanese auto brand continuing support of rotary engines as well as radical, forward-thinking production such as the Mazda MPV is a hallmark of their past. Introduced as the MINAGI Concept car at the 2011 Geneva Motor Show in March, the 2012 Mazda CX-5 will be newest exhibit of the small car specialist’s enterprising future.

Launching their new compact crossover CX-5 for the 2012 model year, the vehicle will become the showcase for a more philosophical expression for Mazda adapting two, new guidelines, KODO and SKYACTIV. Brought to life on the SHINARI Concept, Mazda’s KODO design language is fueled by the desire to institute natural, free-flowing forms in sheetmetal and glass. SKYACTIV is Mazda’s approach to creating efficient, fuel-efficient motoring across the spectrum of creation. Instead of focusing solely on a key piece of technology to achieve desired efficiency, SKYACTIV covers technologies relating to the powertrain, chassis and body construction prioritizing weight reduction as well as improved torque production at lower range driving.

A sleek, brilliant crossover vehicle, the Mazda CX-5 uses the KODO design language to call off a sporty physique. Mazda describes the MINAGI Concept/CX-5 stance as projecting the strength of a cheetah. The CX-5’s front end wears a modified grille grin characterized with chrome trim. Evident at the Geneva Motor Show, the MINAGI Concept’s production ambition was made perfectly clear.

The 2012 Mazda CX-5’s interior reflects top-class construction. Displayed on the MINAGI Concept in black with satin chrome accents, comfort and even luxury wraps the crossover vehicle’s cabin. Solid, milled aluminum door handles accompany the high quality look inside of the Minagi Concept. When the 2012 Mazda CX-5 is released, expect to see a more entry-level cabin made available on lower cost trim models. However, based on the competitiveness of the compact vehicle market, Mazda will need to maintain few compromises in planning the production CX-5’s interior. 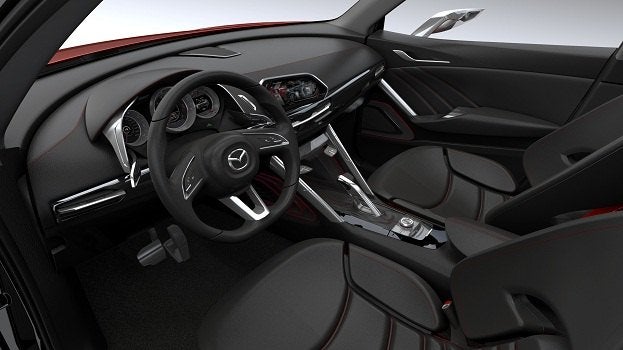 The 2012 Mazda CX-5 production crossover vehicle will be officially introduced at the Frankfurt Auto Show in September. For North American customers, expect the CX-5 to take the place of the Mazda Tribute compact utility vehicle. While Mazda’s SKYACTIV technology will be pivotal in selecting a fuel-efficient yet peppy powerplant, Mazda has not announced engine options for either the MINAGI Concept or the CX-5. Expect powertrain details to arrive close to its late 2011 to early 2012 release.