Toyota Yaris HSD Concept is No Yawner in Geneva The Toyota Yaris was built to the old wisdom of achieving optimal fuel economy; built a small car powered by the most compact engine possible. Today, advanced powertrains often combining gasoline/electric technology, such as Toyota’s Hybrid Synergy Drive, has become more buzz-worthy ways to tout extended traveling ranges on a single tank of fuel. Building the Prius, the most publicly accepted hybrid car built, Toyota has been unafraid to expand the concept across many vehicles within the Toyota and Lexus brands. At the 2011 Geneva Motor Show, Toyota unveils what will be their first subcompact hybrid production car based on a new look Yaris.

The Toyota Yaris HSD Concept presents a new look B-Segment category car which is intended to resemble the next generation of the production car. Proving the first major restyling of the Yaris since 2005, this Toyota concept vehicle projects a degree of excitement with a more angular front end featuring LED daytime running lights. A sporty look for the Toyota Yaris HSD Concept is enhanced by an arcing side roof profile traveling into a sloped C-pillar. Rear spoiler, 18-inch aero wheels and fog lights are added to this hybrid Geneva show car providing an impressively high amount of exterior flash on a Toyota.

The newest application of Toyota’s Hybrid Synergy Drive system, this Yaris concept car is pledging class-leading fuel economy. Though Toyota has not detailed the exact internal combustion powerplant, several facts regarding the electric mode have been revealed. Firstly, the Toyota Yaris HSD Concept car has the ability to run in a all-electric mode producing near zero emissions for a limited distance. This feature is similar to latest generation Prius which allows speeds up to 25 miles per hour to be handled briefly on only electric power. Other Technology the Yaris HSD Concept shares in common with the late model Toyota Prius is solar panels in the roof. For this Geneva concept vehicle, the use of solar charge panels spans the entire Yaris hatchback’s roof. 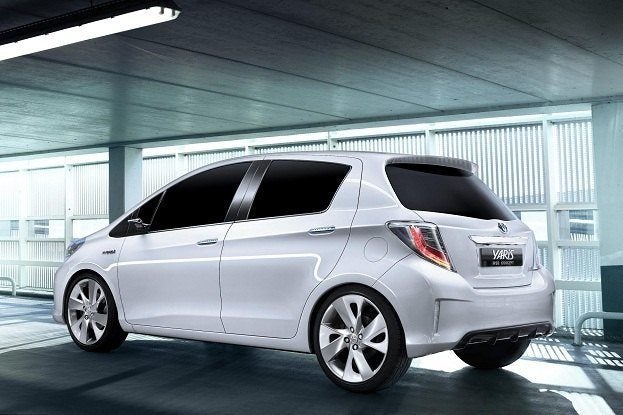 Speaking only for the European car market, Toyota says the production of the Yaris HSD Concept is due for the second-half of 2012. In the United States, the Toyota Yaris has been losing ground in the continent’s now abundant B-Segment category. Newer, higher-tech compacts such as the Honda Fit, Ford Fiesta and the upcoming Chevrolet Sonic have been cutting deep into the aging Yaris’ sales. In 2010, the Toyota Yaris sales nosedived by 36.7% over the previous year. Losing out to competition and a new-found enthusiasm for larger truck-based vehicles due to a period of fuel price stabilization, a refreshed Yaris could be the fix Toyota needs in refreshing sales.