European hatchbacks, wagons, stick shifts – they are things that are often on wish lists of enthusiasts. Wagons with better driving dynamics are preferred over crossovers and SUVs. Generally though the marketplace has other ideas – wagons usually don’t fare well here and as such manufacturers tend to leave them to sell in international markets.

Cadillac surprised many when it introduced a wagon version of the CTS. However, the car has been a slow seller that isn’t likely to continue when the CTS gets a full redesign.

Acura is intent on entering the segment though, announcing the Acura TSX Sport Wagon for the United States last year. In its home market of Japan the car is sold as the Honda Accord Wagon, but over here the car does duty as the entry-level TSX entry-level car.

Pricing for the TSX Sport Wagon starts at $30,960, up from the sedan’s $29,610. The Sport Wagon’s asking price includes a standard automatic transmission however, while the TSX comes with a standard manual transmission. 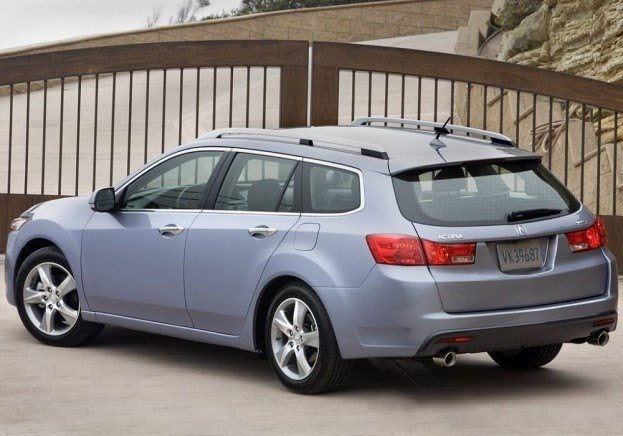 Strike one off the enthusiast wish list there – no manual transmission wagon here. The five-speed auto is equipped with paddle shifters, however. The standard features list looks pretty good as well: leather, heated seats, a sunroof, satellite radio, Bluetooth and a USB port for iPod/iPhone integration.

Opting for the Technology Package bumps you up to $34,610 and gets you a navigation system with voice controls and real-time traffic, a rearview camera, a 15GB music hard drive, an upgraded sound system and a power remote-operated liftgate.

The Sport Wagon is powered by the same engine as the base TSX, a 2.4-liter four-cylinder making 201 horsepower. However, the sedan’s optional V-6 engine making 280 hp is unavailable. The TSX Sport wagon garners a fuel economy rating of 22 city 30 mpg highway, far better than most crossovers. In addition the wagon’s rear cargo area totals 31 cubic feet of space, besting all its crossover lineup companions, including the RDX’s 27.8 or the ZDX’s 23.6. The MDX stands at a paltry 15 cubic feet. Still, if history is any guide the TSX Sport Wagon will be a rarity out on American roads.