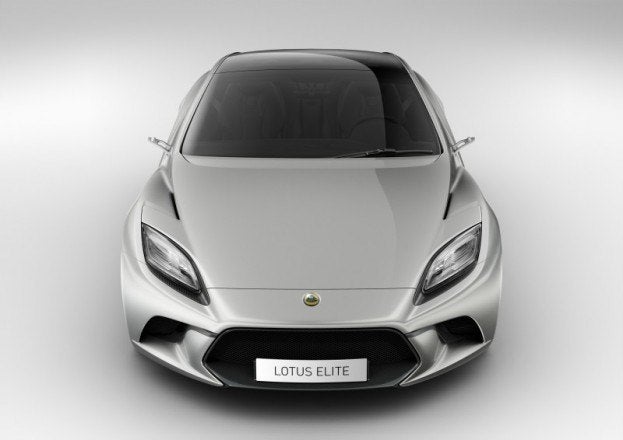 In the past number of months, primed fans of the legendary British sports car brand Lotus were awaiting a special vehicle announcement at the upcoming Paris Motor Show. Circling speculation, many believed the French event would play host to the return of the storied Esprit nameplate. Previewing this car before an official September 29th first showing in Paris, Lotus instead revived the Elite name, attaching it to their upcoming 600-plus horsepower sports car.

First look at the Lotus Elite, this car pales in comparison to any product ever before created by the British-based sports car manufacturer. Assembled as a grand tourer coupe more than a pure sports car, the goal of the Lotus Elite is the fuse both performance and comfort of a 2+2 coupe in a single shape. CEO of Group Lotus Dany Bahar gladly publicizes the heavily inclusive supercar design saying “One could say it’s a car of perfect contradictions, it’s compact yet spacious, high performing yet low emitting, lightweight yet still reassuringly solid”.

Without anywhere near the ground effects ducting and holes found many supercars (including Lotus’ own Exise and Evora) the Lotus Elite appears marvelously chiseled in a calming beauty befitting the Lotus flower for which the brand draws inspiration. The nose and nose air dam loosely reflecting the Formula 1 car the Lotus Racing team has been wheeling in their 2010 return to the world open wheel series. A flat appearing center section of the hood gives the Lotus Elite a butter-smooth grace. Once attention is diverted off the front, the Elite features sharp-edged side bodywork complimented with a single Corvette-like air escape before each cabin entry door. The roof teardrops slightly as the rear window airflow gently sails onto a small rear deck lid. 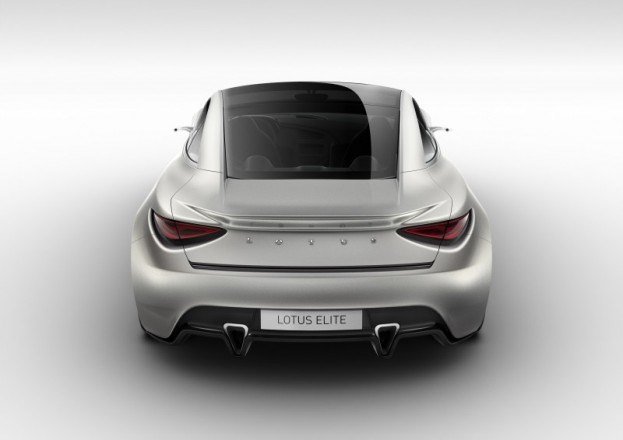 A front mid-engined layout funneling power into the rear wheels, this Elite is the first production Lotus since the 1992 Excel to position its engine ahead of the cabin. Also reintroducing V-8 power to Lotus, the Elite’s 5-liter engine can be offered either by itself or as part of a Elite hybrid version. Employing KERS (Kinetic Energy Recovery System), the Lotus Elite also uses what is explained as a fully hybrid transmission. By this definition, the transmission could resemble the gearboxes used in General Motors’ Two-Mode hybrid offerings. This gearbox would feature electric motors within a continuously variable transmission supplying power at low speeds or varying gear ratios at highway speeds. The collective momentum of the Lotus Elite’s gasoline combined with KERS equates to 612 horsepower and 531 pounds feet of torque.

Projected to weigh over 3,600 pounds, the anxious grand tourer’s launch from 0 to 100 kilometers per hour (62 miles per hour) is estimated in the range of 3.5 to 3.7 seconds. Top speed of this Lotus Elite is predicted to be just under 200 miles per hour. Totaling together, the Elite is quite a performer considering the fact up to 4 passengers can ride inside this vehicle.

Performance car buyers will have a long wait before the Lotus Elite can adorn the driveways or garages of worthy homes. Lotus’ first street-going examples of the Elite grand tourers will be realized in real life until early 2014. When the Lotus Elite will be ready for production, expect to have possession of more than $180,000 U.S. before walking into one of their American dealerships. Looking on the bright side, the more than 3 year time span before the Elite’s impending release offers some of us determined but financially-challenged sports car enthusiasts a carrot (or in this case a Lotus) for personal aspirations.

The Lotus brand has weathered a long period of near lifelessness going back almost as far as the passing of company founder Colin Chapman in 1982. Invigorated with new life, the promise of the Lotus Elite brings forth a future in bloom.