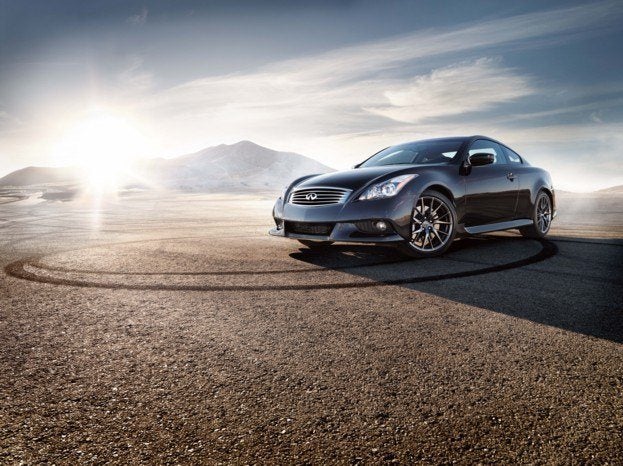 Believe it or not, the entry-level $30,000-40,000 luxury car segment has escalated to the hottest competition within the premium automobile range. While faster, more expensive models exist within the luxury brand’s catalogs, vehicles like the BMW 3 Series and Cadillac CTS are portrayed as carrying their respective marques. Perhaps seen as a frugal way to sample the caress nature of leather seating and touch the high-grade engineering, many expect more from these smaller coupe and sedans. Pioneered by the BMW M3, a performance-seeking luxury car driving crowd are willing to forego a few dollars to capture the essence of modern hot rods.

At Pebble Beach, Infiniti took the wraps off their new sport-oriented vehicle range. Joining M, V, and AMG as letters signifying luxury car performance, the Nissan-owned premium brand introduces IPL as the next acronym for sophisticated tuning. Standing for the Infiniti Performance Line, the new IPL moniker will first transform Infiniti G37 Coupe into a hot street performer. Morphing the sports luxury car into the 2011 IPL G37 Coupe, the inaugural special edition Infiniti introduces a host of the exterior, interior and performance enhancements.

The motivated IPL look is integrated into the G37 Coupe’s outer beauty giving birth to a design both devilish and divine. a ground effect look, the IPL G37 Coupe lower body kit provides a tasteful yet riveting sport appearance. A racy front air dam projects a noticeable splitter detail. Accompanying the more aggressive fascia treatment is integrated fog lamps that shine dramatically even through poorer driving conditions. The pronounced aerodynamic package on the front is gracefully carried along with the rocker panels through tasteful side sills. Completing the modified bodywork, a rear deck spoiler arches over the truck as well as the discreet ‘IPL’ badge. Some of the IPL G37 Coupe’s most redeeming performance enhancements preside within the Infiniti’s rolling chassis. Beyond the stylish 19-inch, 7-spoke graphite-finish wheels centered within Bridgestone Potenza W-rated tires, suspension tuning allows more sure-footed handling. With an increased spring rates, the IRL G37 now convey a more consistent feel for the road surface while shock dampers have also been tailored to “a new premium performance standard” according to Infiniti.

Inside, the 2011 IPL G37 Coupe draws on the best features found on the Infiniti option List as well as adding some exclusive items. Primarily draped in the colour of graphite (a red interior is available if a buyer opts for Malbec Black), leather seating and the IPL G37’s steering wheel is threaded with a red-stitching. Positioned in the technological dash, the Infiniti Studio on Wheels engineered by Bose is standard along with the Infiniti Hard Drive Navigational System. Together, the driver and passengers of the IPL G37 Coupe will bask in additional entertainment through a practically-charted journey.

In the most important place, the performance line of Infiniti puts its horsepower where it’s mouth is with the 2011 G37 Coupe. A specially-tuned high-flow exhaust system and performance augmenting of the 3.7 liter V-6 engine bumps up the power. An 18 horsepower improvement over the conventional G37 Coupe with a slight boost in torque production, the IPL is clearly no where near BMW M line or Mercedes-Benz AMG-fitted vehicles. In fact, the IPL G37 Coupe The engine power of the IPL G37 Coupe does outcome their corporate cousin, the Nissan Nismo 370Z, on the horsepower department.

Starting with the IPL G37 for 2011, Infiniti has full intentions of expanding their new performance line will be featured on future makes and models.