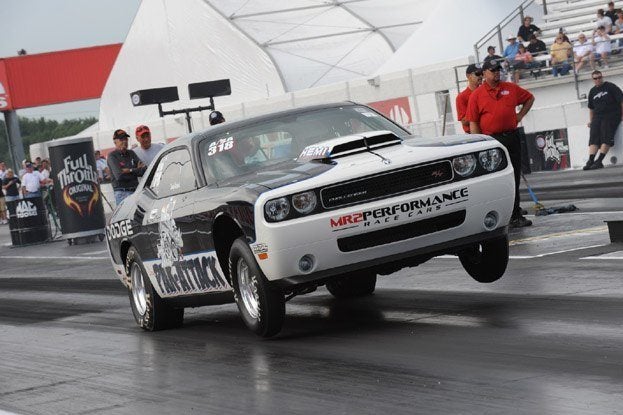 Warms the cockles of my heart it does. The fact that Chrysler saw fit to even make a drag strip version of the reborn Dodge Challenger in the first place was great. And it seems that they were enough of a success for the company to continue to offer them in 2010.

In 2009, the company created 100 of the drag-strip specials. For 2010 the will be making even more of the cars and they’ve said the price will be $39,999. The intent is for them NHRA Stock, Super Stock and Comp Eliminator racing and indeed, they are already sanctioned by the NHRA, so they’re good to go. I know you’re probably thinking the same thing I am, but sadly, the Dodge Challenger Drag Pak is not street legal. So you can just stop that line of thought right now.

The 2009 version of the car was offered with three engine options: A 5.7-liter Hemi, a 5.9-liter Magnum Wedge and a 6.1-liter Hemi V8. The company says 90 percent of the 2009 cars were ordered with the 6.1-liter plant, so there was little point in continuing with the other engines. Which mean that the 2010 Dodge Challenger Drag Pak is offered only with the 6.1-liter Hemi V8. You do get a choice of trannies though. The 2010 car can be ordered with a 6-speed manual or a 5-speed automatic transmission.

And that’s an interesting option. Do any of you strip guys out there know why you’d go with an automatic versus a manual? My experience is that autos are only good over a certain level of horsepower, and that a manual will always be quicker initially off the line. But there must be some good reason for running an automatic.

Just like the 2009 version, the 2010 will batch of cars are about 1,000 pounds lighter than the street Challenger and will include such sweet goodies as a composite lift-off hood with scoop, Viper-style front seats, polycarbonate door windows, a light-weight cooling module with electric fan, manual rack-and-pinion steering, light-weight front brakes and a special cable-operated throttle linkage and pedal assembly. I know, but DAMN, wouldn’t that be a sweet set of options for the street version?

Mopar will only be manufacturing 70 Drag Pak cars for 2010, so get in line and submit your application to Mopar (the only way obtain one of the beasts).