So here we have the Audi RS 5. It’s a rather handsome coupe that sports a 450 horsepower V8 engine under the hood. So, in a lot of ways, you could look at this as being sort of an Audi version of a older Chevy Impala. Sure, sure, it’ll be much more sophisticated, but the idea is pretty much the same thing: Big engine give you big performance in a pretty nice looking package.

Of course, one of the biggest, if not THE biggest particular that differentiates the Audi RS 5 is that the 450 horsepower generated by the revving 4.2-liter V8 gets to the pavement via Audi’s famous, and now ubiquitous quattro drivetrain. The Audi RS 5 also has a seven-speed S-tronic gearbox and sports an innovative center differential in the quattro drivetrain transmit power to all four wheels.

Oh, and the fuel efficiency is a pretty impressive 10.8 liters of fuel per 100 km. Pretty good for a car of these capabilities. Audi also gave the whole drivetrain a thorough going-over with regard to efficiency. The entire drivetrain has been optimized to minimize frictional losses, the oil pump operates on demand, and there is an energy-recovery system that conserves energy during coasting and braking.

And when the S-Tronic tranny is in automatic mode, the driver can switch between three different options: auto, comfort, and dynamic. There is also a launch control program for “flawless” acceleration from a standstill at full power and with minimal tire slip.

Audi goes all hyperbolic in its presser saying the RS 5 has ” … vigorous strength, the spontaneous responsiveness, the joyful high-revving, and the throaty, sonorous music … ” Which reminds me of a flyer a guy thrust into my hand when I was in Vegas once, but let’s not get into that, shall we?

The RS 5 has lots of other gee-gaws, naturally. Xenon headlamps and all these C & C features and RS 5 logos and what not. But that is all the stuff that one would expect with a car like this.

Sales of the Audi RS 5 will begin in the spring for Europe, but sadly it won’t be coming the States any time soon. Its basic price will be approximately 77,700 euros.

Previous
Donating Your Car To Charity 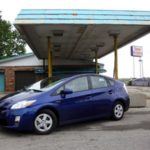