Once upon a time, there was an Auto Journalist named Chris. Chris went for a walk to the local car dealer. Pretty soon, he came upon three sports cars in the dealership and decided to take a look.

Chris really liked the three coupes, and decided take them for a test drive. He drove the first car, a 2010 Chevy Camaro.

“This car is great,” he exclaimed, “but it’s not nimble enough for me, I want something smaller, lighter and tighter-handling.”

“This car is even better. It’s light, fun, nimble, and powerful.” he said, “but it only has two seats, and I need to drive it every day and carry things around. The trunk is too small for that.”

So, he drove the last sports car – a 2010 Hyundai Genesis Coupe…

“Ahhh, this car is just right,” he said happily, “the handling is tight, it’s light and nimble, fast, and even has two rear seats and a large trunk.”

Hyundai, who has always been known for making bland, inexpensive, and purpose-built cars made the automotive world do a double-take last year with their high-value, high-quality, and just plain surprisingly good Genesis Sedan. Now, with a coupe that shares the Genesis name, Hyundai would like to do the same to the Sport Coupe class. The crazy thing is, I think it’s working.

To clear up the confusion, the Genesis Coupe and Genesis Sedan have absolutely nothing in common with each other, except that they both ride on a similar RWD platform, and they both seem to have started a new image for Hyundai. They’re both very good at what they do, and are an excellent choice among their respective segments.

The Hyundai Genesis Coupe only has a few competitors though. Its closest foe is the fantastic Nissan 370Z; a $30,000, RWD, 330 horsepower, two-seater coupe. A great choice among this class, but lacking in everyday functionality if you plan on using it as your primary car. The only other similar cars are the recent modern-retro muscle cars from the big three. The best choice of the three (in my opinion) is the 2010 Chevy Camaro which is a perfectly reasonable everyday car, but feels heavier and lacks some of the sportiness the Genesis Coupe. 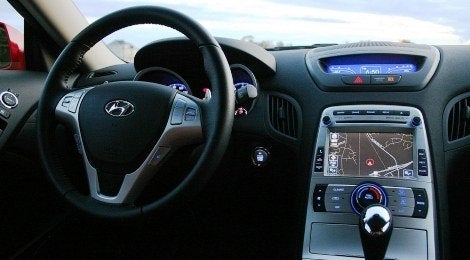 We drove the Genesis Coupe 3.8 Grand Touring model, which comes equipped with a tuned version of Hyundai’s 3.8-liter, 306 horsepower V6 used in some of their other cars. The engine is perfect for the Genesis Coupe, and provides an ideal amount of power for most driving situations. Our model was paired to a 6-speed automatic gearbox with paddle shifters, but a 6-speed manual is also available.

A 2.0-liter turbo four is the Coupe’s base engine and produces 211 horsepower. The powertrain is responsive and refined, and the exhaust produces a satisfying growl when you step on it. My only beef with the powertrain is that it seems almost like Hyundai intentionally held it back a little bit. The car is powerful, but it feels like it could be even faster, especially at higher RPMs.

The Genesis Coupe’s styling is sexy, with sleek and aggressive lines, and a low, wide stance. The interior is just as attractive, with swooping lines and sharp edges creating a modern atmosphere, along with the blue ambient glow of the controls and gauges. Controls are logically placed and easy to use.

Everyday drivability is not compromised for the sake of sportiness. The sport seats are comfortable and the side bolsters keep you in place during hard turns. The back seats are cramped for adults, but work fine for short trips. The trunk isn’t huge and has a smallish opening, but big enough for grocery shopping or luggage. The steering is tight and responsive, and although the suspension might be a bit rough for regular travelers of bumpy roads, it’s a sacrifice I’m willing to make for its exceptional handling ability. 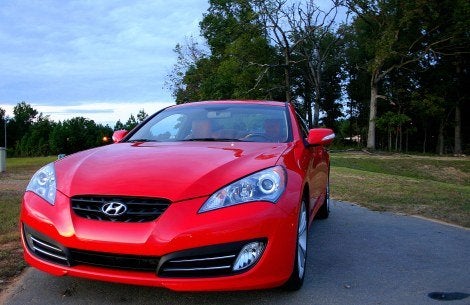 Inside, every Genesis Coupe comes with standard iPod, USB, and aux connections for music (an excellent system,) ABS, Stability and Traction Control, A/C, cruise, keyless entry, power everything, steering wheel controls, auto headlights, Bluetooth, and a new center-mounted information display that shows a clock, instant fuel economy, and torque readings. Some of the extras on our 3.8 Grand Touring model were proximity key with push-button start, HID headlights, an upgraded stereo, heated leather seats, and a backup warning system. Build quality feels excellent, with no squeaks or rattles and solid materials used all around.

Our model was equipped with the newly-available touch-screen navigation, which I truly believe to be the best in-car navigation system I’ve ever used. Controlling the system is easy and quick, it has updated maps, and you can use it while the car is in motion. Most systems shut down while you’re moving, but don’t take into consideration that the passenger could be using it. The head unit can also stream Bluetooth audio from your phone wirelessly. This is the only car that I would buy and choose the stock navigation option.

The best thing about the Hyundai Genesis Coupe is that it makes so much sense. Function is not compromised for style, and vice-versa. Everything is easy to learn and use, the powertrain is great, and ergonomics are spot-on. Hyundai knows who they’re selling this car to, and as a result, the bare minimum base model is still well-equipped. The amazing part…it starts at only $22,000. Fork out $3,000 more and you’ll get the powerful 3.8-liter V6 along with fog lights, visual cues, leather seats, and more. It’s perfectly OK to buy the base trim with no options and not be ashamed. 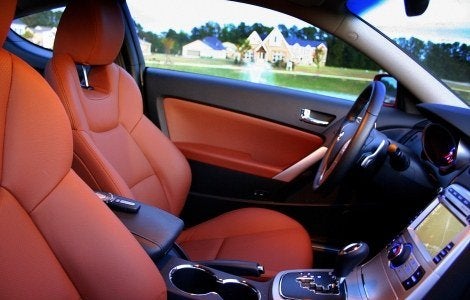 For enthusiasts, Hyundai offers the Track pack, which readies your Genesis Coupe for the track by adding big Brembo brakes, 19-inch wheels with performance tires, track-tuned suspension, limited-slip differential, and special interior accents. Hyundai will also be offering a model specifically for tuners; the Genesis Coupe R-Spec will be out this year, which strips the 2.0T Track of some non-essentials like Bluetooth, auto headlights, cruise control, trip computer, chrome interior accents and steering wheel audio controls but keeping the high-performance track stuff. The R-Spec will cost $23,750 – $1,750 more than a base Coupe and $3,000 less than the 2.0T Track model.

Overall, the 2010 Hyundai Genesis Coupe is a fantastic sports coupe at a very reasonable price. It offers high performance, refinement, and everyday drivability in an attractive package that has its competition a little worried. While you may be apprehensive about buying a Hyundai given what they’ve produced in the past, give them another chance and do yourself a favor by checking out the Genesis Coupe.