It has been said that Porsche really only made one car, at least they made a good one. The 911 is it. Sure, the 944 was impressive, and a lot of the more vintage rides, like the 550 Spyders, sure are a hoot, but when you get right down to it, when Porsche made the 911, they pretty much stopped looking. As direct and logical as a slug to the nose, the 911 is a hard car to argue with. Of course, that doesn’t mean there’s no room for improvement. Especially when consider older 911s versus the new ones (whatever the new number designation might be up to, they’re still 911s in my book).

Take the Singer 911 for example. It started out as an 80s vintage 911, but by the time they got done with it … well, looks pretty good, huh?

First seen at the Pebble Beach Concours d’Elegance this year, the Singer Vehicle Design tweaked 911, simply called the “Singer 911,” is built on an ’80s-era long-wheelbase 911 donor vehicle. Singer then strips each chassis down to its bare shell for, as Singer puts it, “reinvention” into a “celebration of the golden air-cooled era of the world’s most important sports car.” Well, I know some folks in Maranello that would argue with the last half of that statement, but why get hung up on that for the moment.

Although it looks like a vintage Porsche 911, the Singer 911 is anything but archaic. Singer has had a go at chassis stiffening, new active aerodynamics, and a lightweight integral backbone structure and roll cage that improves the torsional rigidity. And although you can’t tell through all that high-visibility orange paint, nearly all of the steel body panels are gone and have been switched for full carbon fiber composite bodywork. Oh, and that shade of orange is specific too. Singer calls it “Racing Orange”.

Way out back in the engine bay there’s an air-cooled 3.82-liter flat-six sporting six individual throttle bodies that looks like a million bucks. The mill features a GT3 crankshaft and titanium connecting rods, and will spin all the way to 8,000 RPM. The mill sends 425 horsepower and 340 lb-ft of torque to a Getrag G50 six-speed manual transmission and thence to the tarmac. Singer says their 2,400-pound 911 will hit 60 mph from a dead stop in 3.9 seconds and top out at 170 MPH.

C’mon, you know you want one. 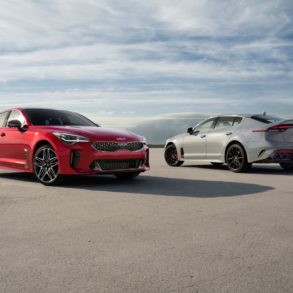