Hey, it looks like MINI is actually going through with this whole “coupe” version of its MINI Copper hatchback – or at least they’re rolling out a concept of the neat looking little guy at the Frankfurt show this September. Good timing too, since this is MINI’s (although, that would be the not all caps, old school Mini’s) 50th anniversary today, August 26th.

” The MINI Coupe Concept is an expression of MINI design and the great ability of the brand\’s designers to fill the elementary values of the brand with new life, using the options of modern drivetrain and suspension technology, and developing fascinating perspectives for the future of the brand on this basis. ”

Blah-blah-blah goes the corp-speak press release, but they are right. MINI, under the guise of BMW, certainly does know how to make variants that still are MINIs. And this new Coupe looks great over all. To me, it has a real, old time hot rod feel to it. There’s a definite chop-top feel to the new roof, that’s for sure. And the integration of the spoiler on the trailing edge works great. Unfortunately, from some angles the leading edge of that notch looks clumsy. It will be interesting to see what design aspects make it into the production model. 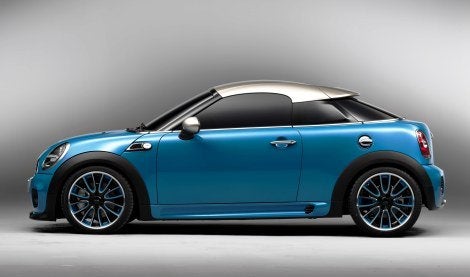 On the inside, it’s a two-seater, which I think is great. The back “seat” in a regular MINI is more of a nice thought than an actual place to sit. And although we have yet to see shots of the interior, judging from the outside, the way-back should have enough room for luggage (if you’re on a trip) or tools & tires (if you’re AutoX-ing or rallying).

And under the hood there’s the most powerful engine a MINI can currently get: A 1.6-liter twin-scroll -turbocharged power unit from the MINI -John Cooper Works model. Said mill cranks out 211 hp and 192 lb-ft of torque. Although apparently that can go all the way up to 206 lb-ft ” … through the Overboost function … “, whatever that might be. 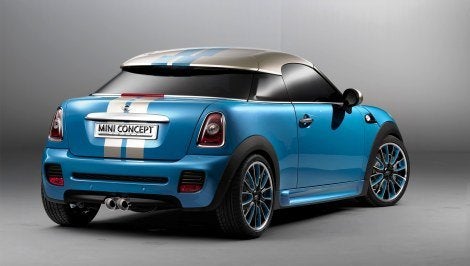 Anyway, I can’t wait to see the real thing, first at Frankfurt, and then, if BMW is smart, in my local MINI dealership. If the coupe is as well thought out and screwed together as the current version, it should be a great ride. And since it’s smaller, lighter and capable of taking all the aftermarket goodies (brakes, suspension, engine bits), you could build up a seriously fun car.