Ah, the moment so many greenies have been waiting for: The EV version of the Smart two-seater is starting series production. Soon, you’ll be able to buy a city car fitted with a highly efficient lithium-ion battery and a 30 kW electric motor is fitted at the rear axle.

As with all electric motors, it’s got lots of torque and all of it is available form essentially zero RPM. In the case of the electric Smart, that means 120 Newton meters of torque that are immediately available.

The smart fortwo electric drive is aimed at ease of use. It can be plugged into any normal household socket and charged the way you’d get juice into your iPod. And it’s cheap too. In Germany, for example at current exchange rates, a full charge costs around two Euros, or about three bucks. 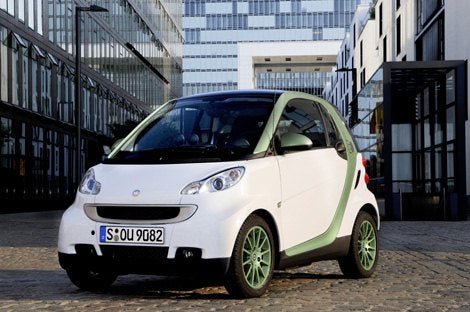 Once charged, you can get 115 kilometers of range (about 65 miles), which, as Smart puts it is “more than enough for city traffic.”

As of now though, you can’t buy a smart fortwo electric drive (the little guys full name, apparently in all lower case for unexplained reasons), they are initially being leased to customers in Berlin. After Berlin, the roll out market, then it’s on to other cities in Europe and the USA, from 2012 it will be “available to anyone interested,” which I assume means you can by one outright. Smart had already tested an EV version of their already popular fortwo in 2007 in London, and the customer reaction was very positive from the get-go. 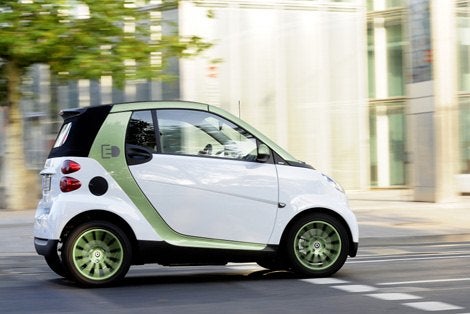 So, the 30 kW electric motor has more than enough grunt to motivate the little guy. Putting down 120 Newtonmetres of torque from no RPMs, the smart fortwo electric drive accelerates from 0 – 60 km/h in 6.5 seconds, which is just as quick as its gas engined brethren. Unfortunately the maximum speed has been limited to 100 km/h, which Smart says is “a suitable speed for the city. ”

Maybe, but I bet you can circumvent that limiter. And I bet you could get a bunch of smart fortwo electric drives and start a one make racing series. That might be fun to watch. And it could be a good thing to have a Saturday support series for, say, the IRL. Roger Penske is the North America importer for Smarts, but I’m just speculating on a hypothesis.