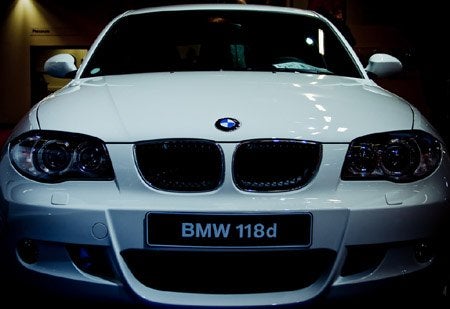 BMW, a company that has been obsessed with technology since they started, recently showed off a bunch of what it considers answers to offsetting carbon emissions in London. Makes sense. London has been on the forefront of emissions regulations in Europe, and is also a large market for what BMW makes.

The real question is whether BMW’s low carbon technologies will make it to the States.

It was all part of BMW’s participation in the annual conference for the Low Carbon Vehicle Partnership (LCVP), which was held in London. The Bavarians showed off their MINI E all-electric vehicle and the BMW 116d diesel, which has lower emissions than the BMW 118d – last year\’s World Green Car of the Year. BMW also had the electric MINI hit the road. It ran in the Brighton to London Revolve Eco-Rally, which finished up at London City Hall and was welcomed by Mayor, Boris Johnson (they have a mayor named Boris?!).

The MINI E will go on a twelve-month field trial in Germany this year to assess the technical and social characteristics of living with an all-electric vehicle in the real world. BMW is planning on expanding the trials to include England, and the first electric MINI was recently delivered to its new owner here in the U.S. as part of the same field trials.

\”We believe the MINI E is an excellent vehicle for trialling this alternative form of sustainable mobility. And what better time to do this than in the year we celebrate the 50th birthday of MINI. We look forward to extending our German and American trials to the UK and I am delighted to see it running so impressively on British roads for the first time,\” said BMW Group UK Managing Director, Tim Abbot.

Yes, but what about here in America? Besides the E-MINIs that are now out there, does this mean that BMW will be bringing more efficient, less polluting cars to our shores?

They haven’t announced it, but I’d be surprised if they did not. BMW has always seemed like one of those carmakers that thinks pretty far ahead. Apart from their horrid styling of late, it’s seemed that BMW has always had four or five answers already tucked away in their hip pocket.

“Oh, we need to start hitting that new XYZ reg? Yeah, no problem. We’ve had the plans standing by.”

Add that to the fact that both environmental concerns AND mileage standards are about to go up, way up, in America, and I’d bet that BMW will be bringing to our shores what they’ve just shown in Jolly Old England.