2009 Rolls Royce Phantom Gets A Facelift 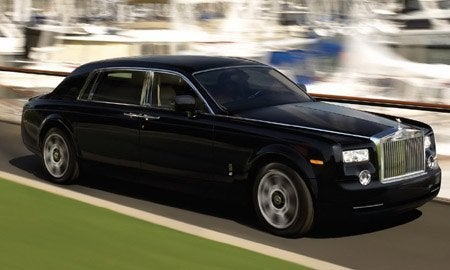 Rolls Royce rolled out a newly face-lifted version of its Phantom at the Geneva show, and we say it\’s about time. Big, hulking, Uncle Fester-like, cringe-inducing, these are some of the words leveled at RR\’s Phantom when it came out, and a lot of the verbal fireworks was aimed at the front end treatment. So, it seems like Rolls Royce is taking a stab at fixing that.

There\’s a new streamlined front bumper that has been designed and integrated with a shallower grille, and is finished in stainless steel. Good, since the grill has long been a Roll\’s most prominent and memorable feature, and the current iteration is oddly out of proportion on the Phantom. The new exterior for \’09 will also feature LED door handle illumination and 21-inch cast alloy wheels as standard. You also have the option of choosing different forged alloy wheels available in either painted or part polished finishes.

On the inside, the rear passengers of the 2009 Phantom will get better connectivity to the 12-inch monitors mounted within the picnic tables as well as new front and rear door caps with integrated grab handles and new bi-directional double reading lights in the C-pillar. Also the rear climate control, volume control and electric window switches have been repositioned and been given wood veneer paneling.

OK, that\’s just the corporate-speak for what the new Roller has got, and it\’s never good PR to go over your mistakes, but it is really hard to look at the previous Rolls as some sort of styling triumph.

It\’s not just that it appeared huge sitting at the curb, it was the overall mish-mash of shapes and sizes, especially at the front. Sure, Rolls has worked on it with this version, but it\’s still fairly hideous. The lights look squinty and beady, the driving lights/fog lights still look like a tacked on afterthought, and the grill looks hugely disproportionate. And the whole rest of the car looks like some sort of idea of what Rolls thought one of their cars would look like in the future.

The new Phantom goes on sale this spring.