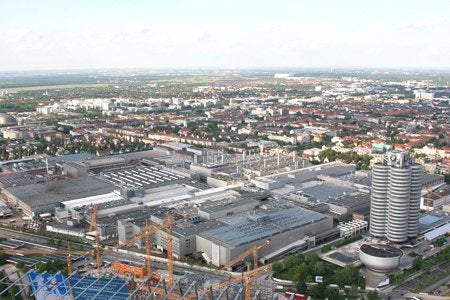 BMW is getting on the green eco bandwagon in a big way as it reviews the possibility of using wind power to augment the electricity needs of its Spartanburg, South Carolina factory.

They\’re not jumping in with both feet, at the moment they are just conducting a feasibility study on using wind energy at the plant site. BMW is partnering with an outfit called Gold Ring Power to conduct an energy audit to look at the data on wind speed and patterns throughout the South Carolina site. If all goes well with the initial study, and the results of the test reveal the viability for wind power at the plant, then BMW will add wind to the list of alternative energy resources used to power the facility.

If you think about it, this is pretty much a no-brainer for any sort of manufacturing concern, not just BMW. Sure, due to global warming and other environmental concerns, industrial pants should be doing this, but there\’s another reason, besides being kinder to mother Earth: Money.

One thing that becomes apparent to anyone who has been around things like solar water heaters or wind turbine electrical generators is that once you get them installed, any given bill associated with it drops. If BMW, or any other industrial concern was bright, they\’d slather every available piece of roof real estate with solar water heaters, photovoltaic panels and solar water heaters.

Why not? The wind and sun are there, might as well make use of them. And a lot of companies are.

Duncan Seaman is the Facilities Manager for BMW, and he explains that “globally, wind power is growing at a rate of about 30% annually and is widely used in several European countries. This assessment is an ongoing commitment by BMW to investigate renewable energy options.”

BMW\’s trial run at the Spartanburg, South Carolina factory will begin with two anemometers being attached to towers to collect data on wind speed and direction. BMW, always interested in the PR angle, will have one anemometer/tower combo located in front of the BMW Zentrum Visitors Center that will also be visible from Interstate 85. Once BMW gets enough data, it will be analyzed by Gold Ring Power, LLC and provided to BMW for further evaluation.

So, good move by BMW. Let\’s see if other factories follow suit.

Spartanburg, S.C. – February 17, 2009… BMW Manufacturing Co. today announced that it has begun a study into the feasibility of using wind energy on the plant site. BMW will partner with Gold Ring Power, LLC to conduct an energy audit to gather data on wind speed and patterns throughout the site. The results of the test will reveal the viability for BMW to add wind to the list of alternative energy resources used to power the facility.
Duncan Seaman, Facilities Manager for BMW, explains that “globally, wind power is growing at a rate of about 30% annually and is widely used in several European countries. This assessment is an ongoing commitment by BMW to investigate renewable energy options.”

To begin this test, two 50-foot towers have been installed on the plant site. Anemometers, similar to measuring devices used by meteorologists, will be attached to each tower to collect data on wind speed and direction. One tower will be located in front of the BMW Zentrum Visitors Center and will be visible from Interstate 85. The towers will stay in place for two weeks and will then be moved to other strategic locations on the plant site to gather additional wind data. After several weeks, the data will be analyzed by Gold Ring Power, LLC and provided to BMW for further evaluation.

“Alternative energy projects such as this are essential to the sustainability of this plant. Following the success of the methane gas project, we continue to look for ways to harness the natural resources available to us. BMW is already a global leader in automotive technology and innovation, so projects like these are a natural outgrowth of our commitment to managing alternative energy resources,” said Robert Hitt, manager for Corporate Communications.

Currently 63% of the BMW plant in Spartanburg is powered through recycled methane gas from the local landfill. This Landfill Gas to Energy Project, launched in 2003, has saved the company over $1 million per year in energy costs.

BMW Manufacturing Co. is a subsidiary of BMW AG in Munich, Germany and is the global producer of the BMW X5 Sports Activity Vehicle and X6 Sports Activity Coupe. In addition to the South Carolina manufacturing facility, BMW North American subsidiaries include sales, marketing and financial services operations in the United States, Canada and throughout Latin America; and a design firm and technology office in California. For more information on BMW Manufacturing, visit www.bmwusfactory.com.