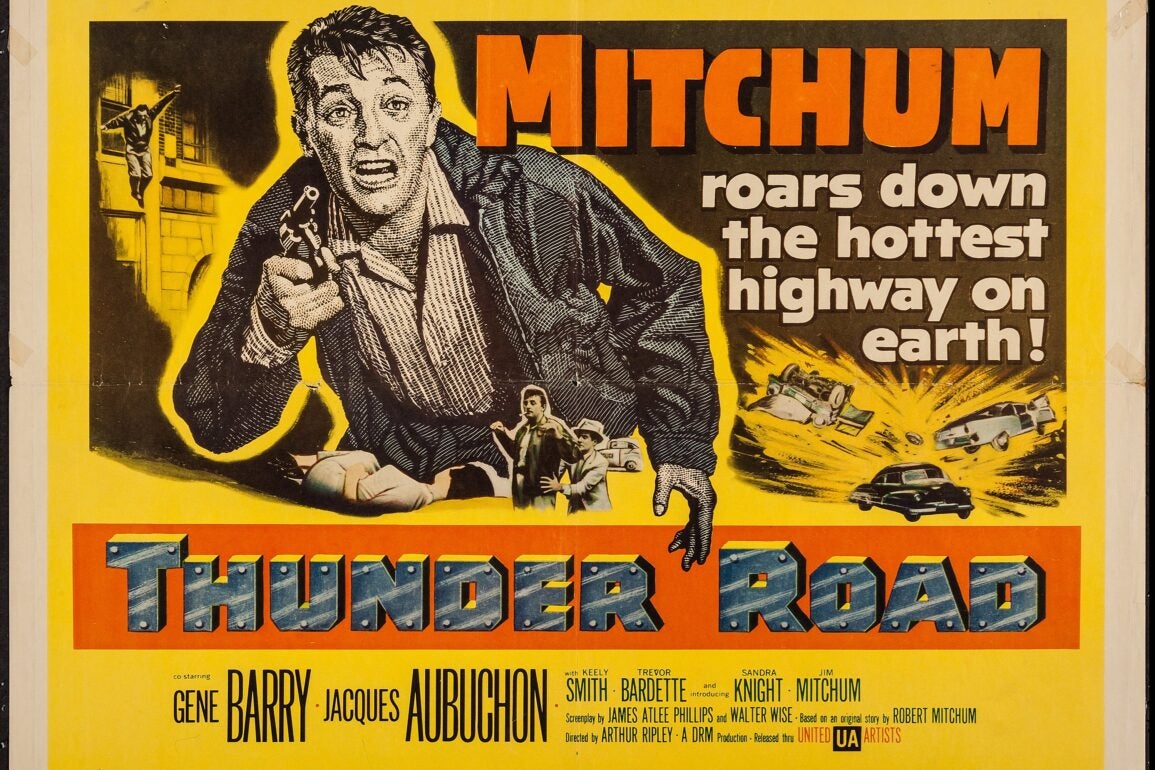 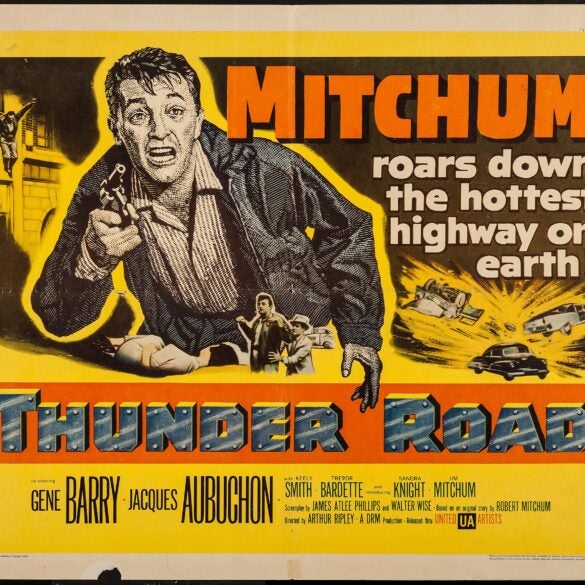 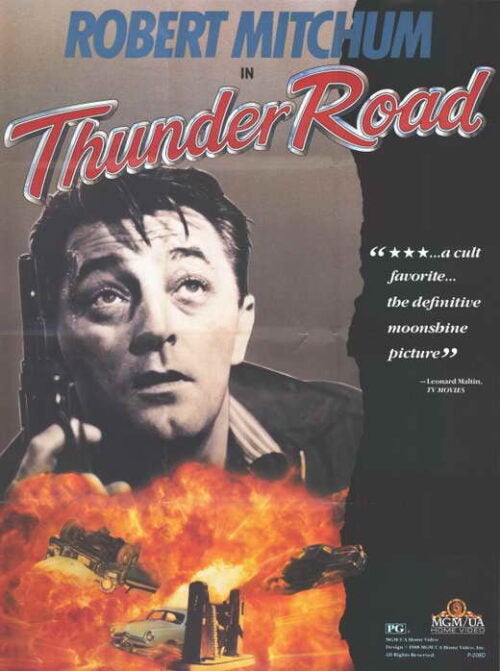 Thunder Road was arguably the first honest look into the post-war moonshine culture that gave birth to NASCAR. If you want a pretty good idea of how NASCAR started, look no further than Thunder Road, released in 1958 and starring Robert Mitchum.

This gem not only stars Mitchum, but he also wrote, produced, and penned the lyrics for the theme song. The supporting cast features Gene Barry as the obsessed government agent, Jacques Aubuchon as a rival bootlegger, and Keely Smith as one of Mitchum’s love interests. Robert’s real-life son James Mitchum plays his kid brother, Sandra Knight is another love interest of Mitchum, while Peter Breck is a fellow moonshine runner. After its initial success, Thunder Road became a cult fave and continued to play at drive-in movie theaters in some southeastern states through the 1970s and 1980s.

Lucas “Luke” Doolin (Robert Mitchum) is a Korean War veteran who now works as a runner in the family moonshine business. In his souped-up hot rod Ford, he delivers the illegal liquor his father brews to secret distribution points throughout the South. Lucas has to contend with the ever-present problem of evading the revenuers (U.S. Treasury agents), now led by the resolute newcomer Troy Barrett (Gene Barry). Lucas is concerned that his younger brother Robin will give into temptation, follow in his footsteps, and become a moonshine runner himself.

To make matters worse, there’s a well-funded outside gangster, Carl Kogan (played with great malice by Jacques Aubuchon), trying to muscle his way to controlling all of the independent local moonshine makers. Kogan is as ruthless as he is greedy, willing to kill anyone who stands in his way. The heat gets turned up when Kogan tries to kill Lucas but kills a government agent and another moonshine driver, Jed Moultrie, by mistake.

As all this is happening, Doolin’s two love interests are never far behind. One is nightclub singer Francie Wymore (Keely Smith, famous for her hit That Old Black Magic). And Luke is either unaware or does not care that one of the local gals, Roxanna Ledbetter (Sandra Knight), has a super-big crush on him and fears for his life.

The revenuers ratchet up the pressure with a series of raids that destroy most of the hidden stills in the area. Lucas Doolin’s father and the other local moonshiners decide to shut down production for a spell. They hope the government will deal with Kogan and, therefore, restore the natural order of the moonshine business, but circumstances force Lucas, bound by his own personal code of honor, to make a final run.

Robert Mitchum is perfect as Lucas Doolin. Sure, Thunder Road is Mitchum’s idea and all, but who else would you put in this role? He’s everything a mid-century moonshine runner should be: tall, taciturn, brave, brusk. Luke Doolin is all action and little talk. What is interesting is how Mitchum also has the native patter down really well. Mitchum is from Connecticut, not The South, but you would never know it.

Gene Barry as Troy Barrett is the perfect foil to Mitchum’s country boy Luke. Barrett is a straight-laced, by-the-numbers government man with zero tolerance or sympathy. Barry usually took more affable roles, but he plays right and uptight rather well here. Meanwhile, we see Jacques Aubuchon as the sweaty, greedy Carl Kogan. Aubuchon always got parts like this, and after seeing him in Thunder Road, you can see why. Fat, flabby, grasping, and without any sense of restraint, Kogan makes a great villain in a story full of the morally compromised.

Keely Smith is great as Francie Wymore, the local nightclub singer, but then again, that was Smith’s main gig. She was married to Louis Prima. She’s got a heck of a set of pipes, and that Luke Doolin boy sure is sweet on her. Almost as sweet as Sandra Knight’s Roxanna Ledbetter is on Luke. Knight’s all blonde, fawning, and as right for her unrequited love interest role as Roxanna as Smith is as Francie. Another instance of the duality at play in Thunder Road.

James Mitchum plays Robin Doolin (Lucas’ younger brother) and is right on the money. The Mitchum boys interact with the ease of real brothers, and of course, they look a lot alike, so that helps. As good as James Mitchum was as the kid brother Robin, he wasn’t the first choice. The first choice was this young up-and-coming singer named Elvis Presley. No kidding!

The role of Robin was originally written for Elvis Presley at Robert Mitchum’s request. Mitchum personally gave the script to Elvis, and, dig this, The King was eager to play the role. But Colonel Tom Parker, his manager, demanded Elvis be paid a ludicrous sum of money. More than the entire budget for the movie, in fact, which sunk the whole deal.

Thunder Road was shot in glorious black and white. Color was, of course, available, but this was an artistic decision. Going with black and white also gives Thunder Road an excellent film noir look. If it had been about dirty dealings in SoCal, Thunder Road could have easily been taken as a noir (being set in Tennessee and Kentucky means its more likely considered a southern drama).

The camera choices, editing, and sound design are well done, if not spectacular. There’s some obvious rear-projection work, and it goes over about as well as you would expect (but hey, it was the 1950s). In Thunder Road, the driving is less about creating an explosive dog and pony show for the big screen (plenty of newer car movies do that, and sometimes, it backfires and flops). Instead, the driving in Thunder Road is more true to the facts as we see a bunch of speed-crazed moonshiners running around the backwoods.

There’s also this line that kid brother Robin says to Luke: “Sounds like they’re havin’ a real twistification down at th’store.” I am SO telling that line to some Rock-a-Billy hepcats I know. Twistification. Brilliant.

Should You Watch Thunder Road?

Yes, Thunder Road looks old and seems dated, but it was made during the Eisenhower administration. Like seemingly every movie made back then that dealt with crime, Thunder Road has a heavy morality and judgmental vibe around it. There’s this whole sense of “the wages of sin” and “he’s going to get his comeuppance” that permeates Thunder Road. The only odd thing I noticed watching it again after all these years is how the third act drags on a bit, but it’s not a dealbreaker.

Although if there is one egregious mistake in Thunder Road, it happens during the first chase scene. While trying to lose the G Men, Luke Doolin seems to intentionally barrel roll his shoebox Ford. He slides it off the pavement, into the dirt, it rolls, it lands right side up, and then he drives off. “Wait, did he just barrel roll that Ford as a getaway move?” I literally re-watched it three times, and yup, he does. Sure, neat trick, but come on Mr. Mitchum.

Still, there’s a sweet close-up of that triple Stromberg setup Robert Mitchum is working on in the garage! Big old fat, all rubber fuel lines, and the wiring is all done up in that old-style insulation. Man, that shot of the engine bay, even in black and white, is so on the money a gearhead can almost smell it.

Although quite different than the movies of today, Thunder Road will still be appreciated by car enthusiasts, old-school NASCAR fans, and history buffs. Or if you just like old movies, this one is worth watching again. As of this writing, it’s available for rent or purchase on Amazon Prime. If you are looking for more good car movies, consider one of our other top picks on Amazon Prime.