I Drove The Audi e-tron & Saw The Future. It’s Weird.

I was in Scottsdale, Arizona for a Turtle Wax event recently, and one of the activities was a sundown drive in a bunch of interesting cars. While some of my cohorts went for hot-rod Porsches and a McLaren MP4-12C, I got to drive an Audi e-tron. How was it? One word: weird

I was relatively sanguine about all this. Everyone that drove an EV (there were three Audi e-trons there) seemed upset at having missed out on “the cooler stuff.” I was okay with it. I have driven lots of hot cars over the years, but an e-tron was completely new to me. If you are familiar with the Q8, the e-tron is about that size. So if you are accustomed to Audi crossovers like that, you should have no problem maneuvering the e-tron.

Table of Contents show
Behind The Wheel of The Audi e-tron
Cost of Ownership
How Does The Audi e-tron Drive?
More Than Just Numbers
Good But Not Grand

Behind The Wheel of The Audi e-tron

Sliding into the seat, I was confronted by multiple touchscreens. In the airplane business, this is what is known as a glass cockpit. Everything in sight was either leather, piano black trim, brushed aluminum or darkened glass. Very slick and high-tech, but in a bunch of ways, not all that different from any other modern Audi SUV or crossover.

The same went for the exterior. It looks like a typical, modern-day Audi SUV or crossover. Like all modern Audis, the e-tron is covered with sharp creases, festooned with plastic, and liberally-sprinkled with sensors on every end and side. One front fender bender, I thought while I was driving, and there goes five grand worth of cameras and radar emitters.

What will the tertiary buyer’s market do when an e-tron gets in an otherwise reparable accident, but it gets totaled because the sensors, cameras, and radar components are worth 80 percent of the vehicle’s value?

I thought the same thing applied to the interior. All of those touchscreen displays control literally every function, seemingly apart from the steering wheel and pedals. What happens when one of those screens goes out? What happens when the Audi you bought from the second owner suffers a screen malfunction and your heater is stuck on “pizza oven” no matter what? You better have a warranty to cover those repair bills.

But this is true of pretty much any modern vehicle. Simple systems that used to be controlled by knobs or switches are now controlled by galvanic/pressure-sensitive haptic touchscreens that will cost you four figures just for the part. Labor will be extra. A lot extra. We are fast approaching an era when cars will be going to the landfill simply because the cost to fix something is more than what the car is worth.

Oh well, it’s not like we have to worry about a disposable culture ruining the plant or anything like that.

How Does The Audi e-tron Drive?

I pulled onto the side street, the silver McLaren just in front of me. The long train of cars all idled forward, coming to a stop before we would all head off in a group. The double-pane windows and build quality had me as if I were sealed inside a moving bank vault. I could hear the McLaren idling but as for the e-tron, complete silence.

When we got out of traffic and on our own, just the Turtle Wax crew, various Otto car club types, and the other journalists with us, I let the McLaren get a healthy gap on me. I was trolling along, doing about 10 mph or so when I mashed the “gas.” When I looked down, I was amazed to be doing well over 60. I wasn’t keeping time or anything, but we got from almost a standstill to freeway speed like that!

Officially, Audi says the e-tron can hit 60 in 5.5 seconds with Boost Mode.

It was completely weird and puzzling, uncanny and baffling on a deep level. I just made up a gap to a frickin McLaren in a beat and a half and it barely registered at all. No sensation of speed. No whoomph. No aural input. No almighty shove in the chest, just a modest rearward pressure from the (slight) G forces. Like that I covered an eighth of a mile or so, and . . . nothing. All I was, was further down the road.

The jury is still out whether this is a good or bad thing. So for right now, I will just say it’s simply weird.

Earlier this year, we did a virtual showdown of the Tesla Model S and the Audi e-tron GT Concept. Judging by the numbers, both are equally impressive. But those are just numbers. Those aren’t the whole story or even close to part of the story. Convincing yourself that performance numbers are all that matters in a car is like choosing your prom date based solely on her measurements.

Good But Not Grand

Regarding the Audi e-tron, there is a legitimate feeling of disconnection that gearheads may not like. For the average driver, probably not a big deal. However, for those who love to drive, this is a feeling of attainment without accomplishment. It’s like standing on the moving sidewalk at the airport. You get 100 yards down the concourse, but you don’t feel like you’ve achieved anything. You simply arrive at your gate.

While we have nothing against electric vehicles, the Audi e-tron is like a horizontal glass elevator. Driving it is as rewarding as pressing the button labeled “Lobby.” 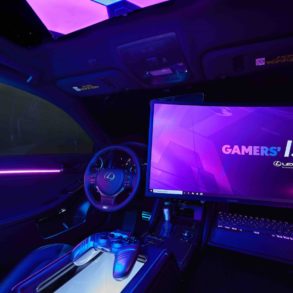