10 Most Abandoned Cars Within One Year of Ownership

You might be on either end of the typical car ownership spectrum: someone who trades it in when the novelty wears off; or you hold onto your car until it’s no longer drivable. Whichever category you fall into, you likely won’t be getting rid of your vehicle while the new car smell still lingers. And if you resemble the average buyer, you’ll keep your ride for around seven years. However, this is not always the case, as new data reveals the 10 most abandoned cars within one year of ownership.

Table of Contents show
Sifting Through The Data
10 Most Abandoned Cars: Luxury Vehicles Top The List
What Is “Car Punching?”
Loaded Versus No Frills
A Silver Lining For Consumers
Future Considerations

Sifting Through The Data

3.4 percent of new cars don’t make it to one full year of ownership. While that doesn’t seem like a large number, it accounts for a significant share of the used car marketplace. At iSeeCars we wanted to determine which new cars are given up the most within one year. We also wanted to uncover possible explanations as to why they are relinquished so quickly. To solve this puzzle, we analyzed 46 million new car sales to see which vehicles were most often resold within one year.

Our list provides an interesting mix. Here are the 10 most abandoned cars within one year of ownership.

Eight of the top 10 models are from luxury automakers with an even split between German and British marques. Earning the distinction as the only non-luxury brand is Nissan, which had two models on the list. The top spot belongs to the Mercedes-Benz C-Class with 12.4 percent resold within the first year, more than 3.7 times the overall average. The second German manufacturer is BMW. They have the most models on the list including the 3 Series, X1, and X3.

So why are these popular luxury vehicles quickly abandoned by their owners? One possible explanation could be their spotty reliability during the model years examined. However, since reliability woes aren’t common within one year of ownership, more plausible reasons prevail.

What Is “Car Punching?”

A possible explanation involves the incentives that BMW and Mercedes-Benz provide dealers for selling new cars. These generous incentives encourage dealers to purchase their own new cars, using them as loaner vehicles briefly before reselling them. This practice “boosts” the dealer’s initial sales while still introducing customers to the latest and greatest as their current vehicles are being serviced. This tactic, known as “car punching,” is one of the used car industry’s dirty little secrets. While iSeeCars removed anything driven less than 1,000 miles to eliminate obvious instances, punched cars from these manufacturers are likely still included in the study.

The additional luxury vehicles – Land Rover Discovery Sport and Range Rover Evoque, Mini Clubman, and the Jaguar XF – all come from British automakers. Similar to the German vehicles on the list, the Discovery Sport and Range Rover Evoque both have less than stellar projected reliability ratings from J.D. Power. Meanwhile, Jaguar is plagued by expensive operating costs and the Mini Clubman is among the most expensive in its class, exacerbated by lower than average fuel economy ratings.

The appearance of these German and British vehicles hint at a broader trend among luxury vehicles as a whole. When examining the vehicles given up most often from a brand perspective, eight of the top 10 are from luxury automakers. Fiat and Nissan are the notable exceptions.

Loaded Versus No Frills

Why do luxury car owners get buyer’s remorse more often than non-luxury car buyers? It could be because luxury buyers are quickly bored with their vehicles, yet have the disposable income to suffer the depreciation hit.

A more settling reason could be because the German and British models here are among the lowest-cost ones from their respective brands. This could mean they are a customer’s first foray into luxury car ownership. If that’s the case, they may realize owning a luxury vehicle simply isn’t for them. Or, more depressingly, they can no longer afford to make the monthly payments and relinquish the vehicle. They may also find the base models of these vehicles aren’t as luxurious as they anticipated.

The Nissan Versa Note hatchback and its sedan counterpart round out the list. Unlike the luxury vehicles previously noted, these subcompacts are among the lowest-priced cars in their segment. The Versa and the Versa Note each have no-frills interiors and lack standard safety features beyond a reverse camera. The consumers who purchase these cars likely decide to upgrade to something with a nicer interior and more features. 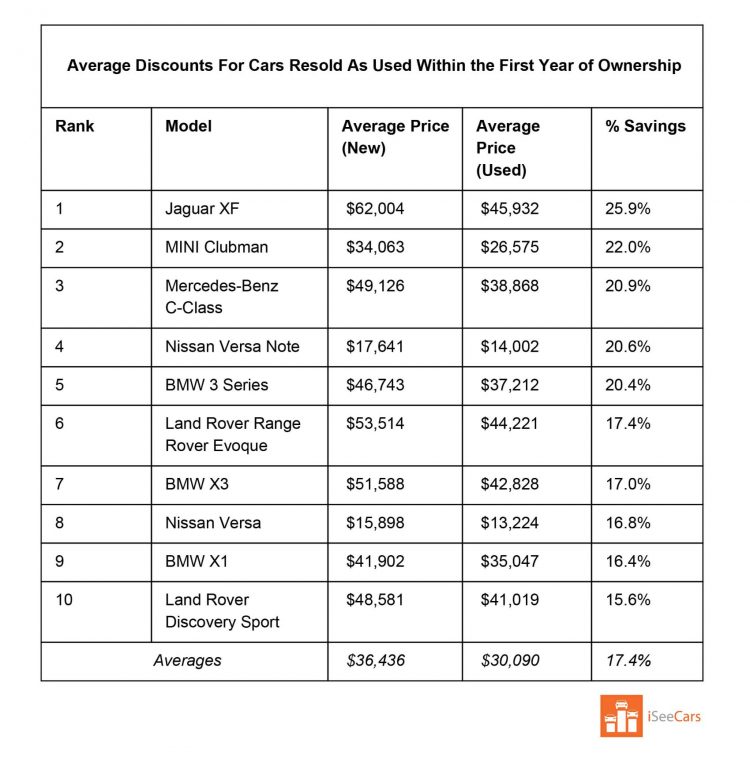 A Silver Lining For Consumers

The data shows the average savings for a car sold within a year of ownership is 17.4 percent less than the vehicle was new. The vehicle with the largest price reduction is the Jaguar XF at 25.9 percent, amounting to over $16,000. Other vehicles with discounts above the average include the Mini Clubman, Mercedes-Benz C-Class, Nissan Versa Note, and the BMW 3 Series.

Regardless of why these vehicles were given up, they may present some incredible savings opportunities in the used car marketplace.

Related: Here are 14 of the most reliable vehicles on the market today.

If you’re looking for a new car, it’s important to understand you can likely find a less than one-year-old version. Especially if you’re willing to travel to get the best deal. While some vehicles here may have below-average reliability, they could have been abandoned simply because they did not align with the buyer’s lifestyle. As with any vehicle purchase, it’s important to do your research. Check to see if there are any underlying quality issues or concerns; then decide if a one-year-old car is worth pursuing.

Julie Blackley is the Communications Manager for automotive research firm iSeeCars.com who enjoys analyzing car data more than she cares to admit. She helps readers better understand the market so they can make informed decisions regarding vehicle ownership. Julie also spends a great deal of time wrangling her two toddlers in and out of her own vehicle.

Join our community to stay up to date on cool car stuff and updates every few days:
Read This Next
Acura SH-AWD Explained: What Is It & How Does It Work?