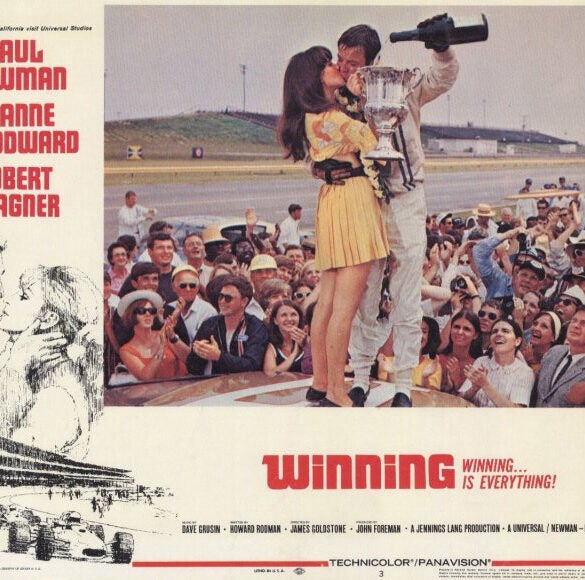 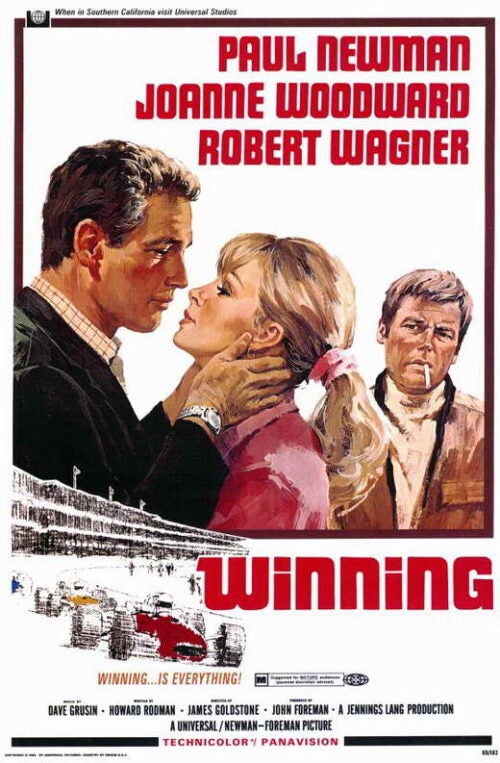 Although it’s now older than most car movies, Winning is a good examination of the American racing scene in the late 1960s. It’s also worth noting that, because of this film, Paul Newman got into racing. Winning is one of those rare car-oriented films that takes its subject seriously and treats it with the appreciation it deserves.

Winning is a 1969 drama about professional racecar driver Frank Capua (Newman). After winning a CanAm race at Elkhart Lake, Frank meets Elora (played by Newman’s wife, Joanne Woodward). After a whirlwind romance, Frank and Elora get married. Elora has a teenage son from her first marriage, Charley (Richard Thomas), and the two become very close; Frank becomes a needed father figure, and Charlie gives some much-needed grounding to Frank’s life.

But, like many racers, Frank is so obsessed with what he does he starts to neglect his marriage. Elora has an affair with Frank’s main rival and teammate, Luther “Lou” Erding (Robert Wagner). Frank finds them in bed together at The Speedway Motel while getting ready for The Indy 500. After he storms out in a silent rage, the couple separates. Frank still sees Charley, but his growing resentment towards Elora and Lou fuels his commitment to racing.

At the Indianapolis 500, Elora and Charley watch while Frank makes a charge from mid-pack to win. Frank’s post-race world devolves into a blur of parties, well wishes, glad-hands, and accolades. It all builds from there in mid-century, Panavision glory. The color is washed out, the camera angles can be extreme, and the editing is anchored in the style of the time. Winning was directed by James Goldstone, a journeyman helmer of the old school. He’s also noteworthy for directing the second pilot of Star Trek that got the show greenlit.

Truth vs. Fiction In Winning

The fact Newman and Woodward were real-life husband and wife makes all of their scenes crackle with an energy that is impossible to fake. In Winning, Paul Newman is everything Steve McQueen wishes he was. He’s a better actor, better racer, better looking, and married to Joanne Woodward.

Newman was an extremely complex individual. He was rare in the acting world insofar as he didn’t fully know himself. Normally, a deep understanding of who you are and what drives you is crucial to being an actor and readily apparent to those watching you. By his own admission, Newman did not understand himself very well. He had no idea what motivated him to respond to certain situations in certain ways. Most people in this condition would take up psychoanalysis, but Newman did his therapy through his acting. You can see him go from bewildered in his earlier films to more self-aware the more he acted.

Case in point is the movie Winning. Sure, there’s that last scene with him and Woodward – those kids were crazy for each other – but it’s the scenes with Richard Thomas that ring true with a frightening intensity. The backstory is that Paul Newman was having problems with his son, Scott, while filming (his only son too). Scott was a tragic individual, and adding to his personal calamities was that he was raised by a dad who wasn’t all there, emotionally speaking. What Scott needed to survive, Paul was incapable of giving. And Paul Newman realized this. He understood his son was drowning but didn’t know how to swim himself.

As often happens in situations like this, it manifests in long, drawn-out arguments. So when you see the on-screen tension between Capua and his fictional son Charley, realize that moments before, Newman was probably arguing with his real son. Scott Newman died of a fatal overdose of valium in November of 1978 (The Scott Newman Center was later established in his honor).

As a movie for a general audience, the biggest problem is how Winning tries to be two things at once. If you were to lessen the emphasis on racing, Winning would be an interesting look at a relationship between two emotionally injured people. With Woodward and Newman, you have the acting power to pull it off. Conversely, if you were to limit the relationship stuff, you would have a great, if not overly straightforward, racing movie. It could have been either, but it tried to be both, and in that respect, Winning doesn’t fully work (the late Roger Ebert had mixed feelings on it too).

What does unequivocally work is the acting, even if the script is pretty soapy. The old industry joke goes like this: “Acting is actually acting like you’re not acting, so act, but don’t act like you’re acting.” It’s strange to think about, but in a way, Paul Newman wasn’t really acting a lot of the time. Despite all his natural talent, Newman struggled to be an actor, and it took him decades to get into the groove as good as he was.

In Winning, we see a guy playing a guy who doesn’t know why he’s more interested in his work than in his relationship; a guy who struggles to connect with a son he dearly loves. Are we seeing Frank Capua in that scene or the real Paul Newman? I don’t know, and I bet even Newman couldn’t say for sure.

Should You Watch Winning?

Besides being the movie that got Paul Newman into racing, a gift we can all be thankful for, there are tons of fun sights and sounds for us gearheads to enjoy. There’s a full-on CanAm race at Road America and a cool rally segment with a boss Mini Cooper. There’s a walking tour of the old Riverside road course and a Riverside stock car race. A great “blink and you’ll miss it” moment is the inscription “If you can read this, please turn us right side up” on Capua’s stocker – that he later ends up rolling. And how about that gold metal flake Meyer’s Manx dune buggy Frank builds for Charlie?

And then the old Indy scenes like gasoline alley with the stables for garages (they burned down), the Speedway Motel where all the drivers and crews stayed (right behind turn 2), USAC guys in gold pith helmets, and a young Johnny Rutherford cameo shaking Newman’s hand after qualifying. The accident at the beginning is taken directly from the 1966 Indy 500.

This is one all gearheads should watch again if it’s been a while, and if you are a younger enthusiast, I recommend it as well. As of this writing, Winning is available for rent or purchase on Amazon Prime (or you can grab a DVD version if you would rather). If you are looking for more good car movies, consider one of our other top picks on Amazon Prime.