When the Fiat 500 Meets Mopar 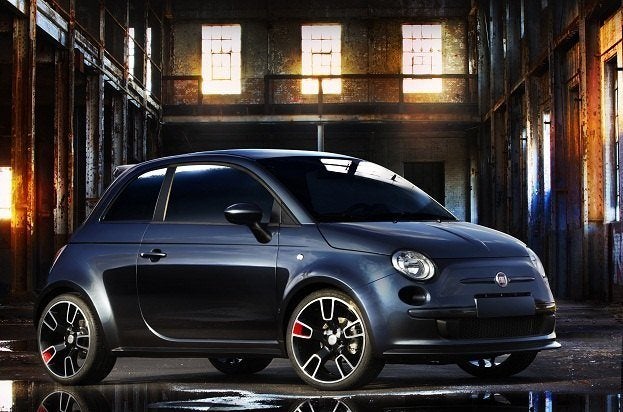 Joining the growing United States small car landscape, the Fiat 500 is depending on its classic European design can be accepted as more than an under $20,000 transportation option. Assembling individualized showroom settings in only handful of existing Chrysler Group dealerships, puzzled observers of the Pentastar brand were wondering if Chrysler were going to have any involvement with the Fiat 500 compact. Potentially seen as an outsider, the Mopar Underground team welcomes the Fiat 500 to the United States Chrysler family by tuning the European example of the Italian brand’s mini compact vehicle.

Introducing all-new Mopar pieces, the 2010 Fiat 500 modifications are first noted as exterior trim additions. The Chrysler-based parts and accessory company chose to cover this Italian-designed compact with a dreamy Dark Thunderbolt Gray. A lowered vehicle compared to the stock compact Fiat 500, other changes includes a front air dam/lip, rear spoiler as well as rear valance and brake ducts continues to differentiate this show car. Serving as the most captivating alteration of the stock Fiat 500 is the much dressier wheels and tires. Centered within Pirelli tires, 18-inch Alcoa wheels are dabbed with one red spoke opening.

While this Mopar-refined Fiat 500 will not be a barn-burner in the engine performance spectrum, a gentle power boost has been coaxed from the mini compact car. Funneling tailpipe emissions more efficiently, a Mopar-designed custom exhaust system awakes some additional horsepower and torque from the 1.4 MultiAir engine. Performance handling on this Fiat 500 SEMA Show car is helped with the addition of a front strut tower brace.

Achieving a mildly sportier exterior look, the Fiat’s cabin enhancements are quite subdued. Inside of a largely black interior, a healthy use of red is used along the driver’s side of Mopar’s Fiat 500 in order to emphasize the motorist’s presence.

The Fiat 500’s appearance at the 2010 SEMA Show is part of the Fiat’s return to a full presence in the North American automotive market. Several of the initial 500 Prima Edizione models have been donated to charities relating to Italian culture. Less than two weeks ago, the 35th Anniversary gala for the National Italian American Foundation brought in $69,000 US through the sale of these early Fiat 500s. Six days prior to that sale, car “Numero Uno” sold in Toronto, Ontario, Canada for the 17th annual Venetian Ball. Benefiting Villa Charities, these first Fiat 500 in the Prima Edizione release raised $85,000 Canadian during its live auction.