What is Mazda’s Next Sports Car?

After dropping the RX-8 out of production, Mazda has not yet come up with a good replacement.  They have great looking concepts floating around, but none have made it to production yet.

Sure you can still buy the MX-5, but that is more of a sporty weekend cruiser, it is unassuming and good looking.  They need a car that stands out against the new RWD sports cars, such as the Nissan 370Z, the revamped Audi TT and the fantastic Scion FR-S and Subaru BRZ.

The last concept car that made it out to the real world with considerable attention was the Furai, which was more of a Gumpert-killer than anything else.  Let’s look at some of the more street suitable ideas they’ve been spewing out, and see if there’s anything behind them.

First on the list is the very stylish RX-9 concept. 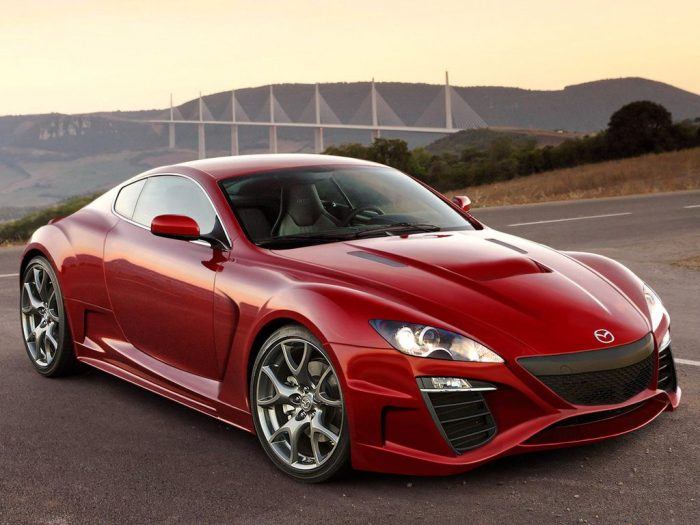 This car was surround by a whirlwind of rumors.  It was perceived to be the resurrection of the RX-7 after the RX-8 left many people disappointing with the lack of torque and overall power, coupled with horrendous fuel economy.

The great handling and clever rear doors couldn’t help you look past the issues.  Honestly a rhinoceros would be a more economical daily driver.  I speak from experience being a previous owner.

On top of this, the Wankel Rotary engine was notorious for being moody and flooding, again speaking from personal experience.  However this new car was rumored to have 300+hp, and also rumored to combine an apparently powerful rotary engine with hybrid technology from a deal with Toyota.  This electric power would work mostly as an engine booster to improve mid range torque, and also boost mpg during long journeys.

Styling wise, they were onto something good with the RX-8.  To really perfect the styling they needed to get rid of that anime looking smile on the front, and keep the big wheel arches, and simplify the angles on the car to give a new take on a classic Le Mans racing look.

Sales were, again, rumored to begin late this year.  But talk is cheap, and Mazda was already struggling to meet the European requirements for emissions and U.S. requirements for mpg across the brands range of cars.  Thus began the demise of the rotary engine development.

After a while the rumors stopped, and some reported that all of the plans were debunked.  Now there are a couple rumors surrounding a 2017 release of a new rotary sports car on the 50 year anniversary of the first Mazda rotary engine.

Not to let you guys down who were looking forward to that, but the car isn’t even listed as a concept on the Mazda website.  Rumor has it that they have an MX-5 based RX-7 in the works for a release that would be soon, but something makes me think we would have heard more about this from Mazda themselves recently.

However this next concept almost broke through to becoming a real car.

The 244 hp coupe concept made it as far as to be driven on road tests.  I think they could have had something good here if they had stuck with it.  Performance wise Mazda said that it would be based off of the MX-5 like the fabled RX-9.

How can you go wrong with a small coupe based off of the MX-5?  Styling wise it is…well…confusing.

The car has an exterior designed by Franz von Holzhausen, and an interior apparently designed by Spock.

It has a very futuristic look which is good and bad.   However with a rear drive platform and a 16 valve DOHC inline 4 cyl engine, the proper ingredients are there for a cheap sports car.

It also has a clear cover on the hood that shows off the engine, which is pretty cool although it isn’t showing off much.  Two things Mazda should have done.  One is to simplify the exterior so it didn’t look like a submarine.  It looks too “fake” like a toy, and it neither looks aggressive or very fun.  Two is to put it into production replacing the RX-8.

Or maybe looking back on all of this, they should have just put that engine in the RX-8, given it 30 mpg, done a turbo version as well and called it a day.

The Taiki was the concept for the next generation of Renesis rotary engines and despite the quirky looks, it is just a front engine rear drive platform.  This was another installment of the “flow” design series, and it was stated to be formed for improved aerodynamics.

The styling is based off of flowing robes that allow a “celestial maiden to fly in Japanese legend ” which is strange, while it is also made to visually express the flow of air.   Maybe they should spend more time designing something that looks like, oh I don’t know, a car?

I’ve been sitting here trying to think of some clever insult about the looks, but it is just too far out there to really describe.  It is fairly good looking until you get near the back tires then *gasp*…it looks like a Plymouth Prowler crashed into the back of it!

The interior is pretty outlandish too, with an awkward looking steering wheel and rev counter lights that wrap around the driver. The Taiki sums up their problems, and is a perfect example of why we don’t have an RX-8 replacement yet.

Besides the emissions laws and mpg standards enforced on car companies making it difficult to produce a real simple sports car anymore, they spend all their time making outrageous prototypes that never will meet the showroom floor.  In other words, there may not be anything beyond the MX-5 for the next few years.