The Beetle is no doubt the most iconic car in Volkswagen’s stable, but the Golf has a strong following of its own. To celebrate the launch of the first GTI 35 years ago, the company is introducing a special edition model.

It is called the Golf GTI Edition 3 and it follows the Edition 30 model launched in 2006 to commemorate the car’s 30th anniversary. The most consequential changes to enthusiasts are under the hood.

The GTI Edition 35 gets an extra 25 horsepower through engine tweaks by VW engineers. The tweaks bring the total from the GTI’s 2.0-liter turbocharged four-cylinder to 235 hp. VW hasn’t released any updated performance figures, but it’s safe to say the 25 horsepower will provide some extra zip. 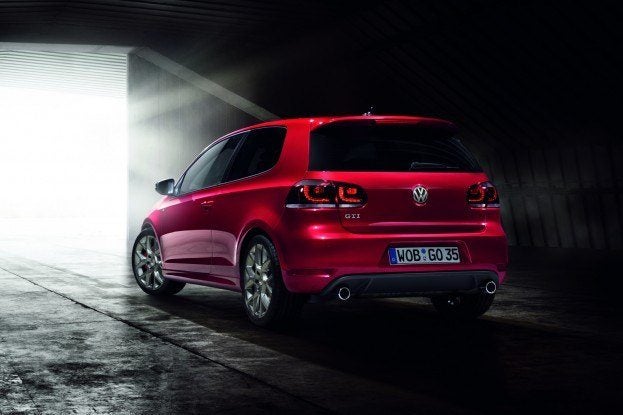 Visually, the GTI Edition 35 is more aggressive, with blacked-out headlights, taillights, windows and a black finish on exterior elements like the grille and mirrors.

Of course, special edition badging is also in order, with “35” appearing on the fenders. A very important new visual element is Audi-like LED daytime running lights, which provide a standout graphic day or night.

“Edition 35” appears on the door sills inside, along with it embossed on seats and head rests. Speaking of those seats, they look very comfortable and sporty – they remain unchanged from the standard car though, save for a new honeycomb fabric pattern. Paying homage to the original car with a unique touch, the gearshift lever has been replaced with a round one with golf-ball like indentations.

It isn’t clear if the car will be offered in the United States. To court enthusiasts, the Golf GTI Edition 35 will be formally introduced at the Worthersee GTI Meet from June 1st-4th. It is already available for order in Germany though, starting at €30,425 (a steep $43,734 USD at current exchange rates). Deliveries are scheduled to begin next month.