When I first saw pictures of the VW Dune Buggy, I thought it was a prop for some upcoming sci-fi movie. Tron II – Electric Tron-a-Loo or something. But no, VW is serious. Or as serious as you can be with a show car. Which is what the Dune Buggy – officially called the ID. BUGGY – is at this year’s Geneva International Motor Show.

VW is serious about their electric vehicle ambitions. They have to be. Since that diesel-gate debacle pretty much rang the death knell for consumer diesels, VW knows it has to go somewhere non-ICE. So get ready for EV (almost) everything from Der Peoples Kar. So, as strange as it may seem, VW is pretty serious with an off-road EV.

Funny thing is, the original dune buggies back in the 1960s weren’t VW products. They were cobbled-up, home-brew specials made from Beetle parts, not direct from the factory. As I recall, it all started with this guy named Bruce Meyer. Although generically referred to as “dune buggies,” his was officially dubbed the “Meyer Manx.” The Manx was the original seed for seemingly endless “specials” made on Beetle platforms. There were little vans, Porsche-like speedsters, crazy race-car-looking things, and of course, endless variations on the Dune Buggy.

But how could there not be? It was the 60s! The Beach Boys! Frankie & Annette! Ride the Wild Surf! Dick Dale! Greg Noll! This was a vehicular manifestation of the collective need of every teenager not to live in Iowa and get to the beach. 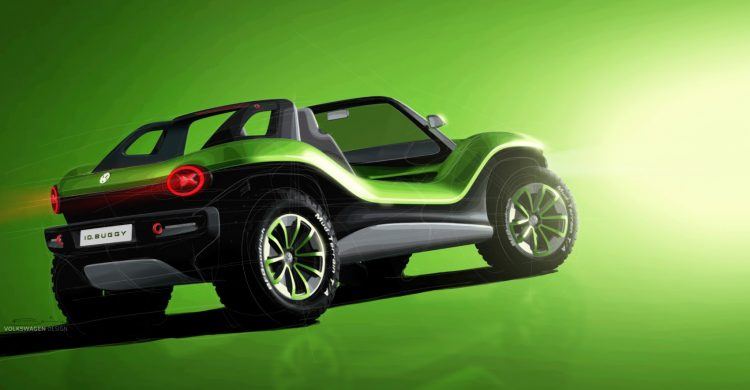 Blast From The Past

And have you ever driven one of these things? They’re a total hoot. No doors, no roof; they weigh next to nothing and the suspension is robust enough to handle (literally) bounding over dunes. Of course, those are also the biggest flaws. They make perfect sense getting from Hermosa Beach down to Rincon to catch a better swell, but commuting from Joliet into Chicago for a client meeting in February?

Just like the originals, this Dune Buggy has no fixed roof or conventional doors, and the open side sills dominate the overall look. The reinforced windscreen frame and the Targa bar (open at the side) provide rollover support. A black tarp can be stretched between the windscreen frame and the Targa bar for protection against the elements. The wheels and large off-road tires (BFGoodrich All-Terrain T/As) are borderline goofy and cartoon-like.

The top half is painted in matte Fern Green, while the bottom is a textured Grey Tech Blue.

Unfortunately, they’re not going to make a production version of the thing (although that would be rad). Like I said, they are serious but in a different way. What this actually allows is for VW to show off their engineering skill with regard to future EV platforms. This Dune Buggy concept is based on VW’s modular electric drive matrix, or “MEB.” The idea is to demonstrate how multifaceted and flexible this new platform is.

The Dune Buggy is VW’s way of saying, “Look at our MEB. It works in trucks, it works in cars, and you can even have fun with it!” And that’s a very smart move. Nobody is going to buy an EV to show they are more hair-shirt than thou. Then VW says this: “The new MEB concept vehicle shows that this fully electric platform can be used for more than just large-scale series production models. Like the Beetle chassis of yesteryear, the MEB has the potential to facilitate the development of low-volume niche vehicles.”

That sounds like a major corporation egging us on to take this platform and mess around with it as we see fit. Now doesn’t that sound like fun?

Worldwide, around 250,000 vehicles were built as one-offs or at low volumes through the 1980s. I’m assuming they mean Beetle-based stuff, so VW gets a solid two-base hit. One, they show off their upcoming MEB electric vehicle platform, and two, they hint at releasing it to the hardcore gearhead shade-tree tinkerers out there.

Anyway, I’d love to stay, but I heard there’s a big swell heading for Steamer Lane, so I gotta run. In the meantime, you can catch the Dune Buggy during the Geneva International Motor Show starting on March 7th.