So far, Volkswagen’s big expansion plans have primarily concentrated on repositioning its core models. The Jetta and Passat are the first models developed under the new philosophy, redesigned with bigger, cheaper and more mainstream approaches.

The change is paying off; VW sales are up significantly. The goal to is to sell 800,000 cars in the U.S by 2018. VW has never been a big competitor in the SUV market; the Touareg is aimed at the higher-end of the segment and the compact Tiguan didn’t go on sale until 2008.

Word is that VW is readying a new three-row Tiguan, and the next-generation Touareg will undergo the same crash program as the Jetta and the Passat. With the Cross Coupe Concept VW is previewing a future design language for SUVs at the Tokyo Auto Show. 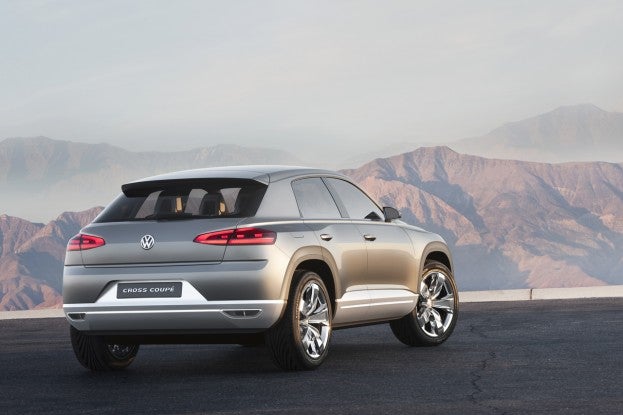 It’s referred to a Coupe, but it is really a crossover with a little more rakish roofline. The design up front features VW’s new, three bar grill that has been spreading across the lineup. In this application though it has a different twist; two chrome grille lines curve upward into the headlights at each corner, making for a unique styling trait.

Given that there are only three bars in VW’s grille design, there is a gap below the hood that looks kind of odd. The horizontal lines help to emphasize width. Overall the Cross Coupe looks good but there is quite a few awkward angles.

In the interior there is a whole lot to like, and we hope the Cross Coupe is a harbinger of things to come. The materials and colors used are top notch, and appear very premium. Its almost if VW has remembered how to make nice, top-notch interiors again. The latest lot (Jetta, Passat we’re looking at you) of cars has failed to impress in that regard.

The power train is has, of course, an element of electricity like most concepts nowadays. The extended-range electric vehicle drivetrain offers 25 miles on battery power, and two electric motors are at each axle to provide an all-wheel drive system. The lithium ion battery pack has been packaged into the center of the vehicle where the transmission tunnel usually is.

A turbocharged four-cylinder helps recharge the system when the battery is depleted. Together. the output is 262 horsepower and it scoots the Cross Coupe to 60 mph in seven seconds. It will be interesting to see if this front end design goes into production. If it does, it will help set SUVs apart from the rest of the lineup. They’ve been pretty much following the same path.