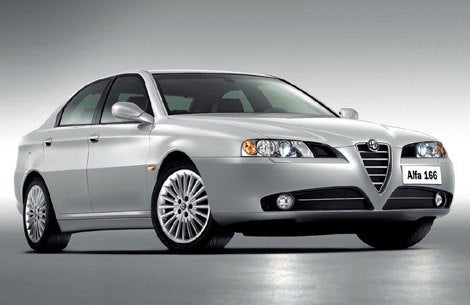 See, it’s not all bad news about bailing out Chrysler. Here’s a good example: we get goodies like the Alfa Romeo 169 sedan. There’s a lot to like here, if you’ve got a penchant for Italian cars. Now I’m not a sedan sort of guy, but I will admit to having a thing for the Maserati Quattroporte. But since I’m not rich enough, perhaps the U.S.-Spec Alfa Romeo 169 is worth a look.

The Alfa Romeo 169 is the successor to the 166 sedan. When Alfa first rolled out the 166 in 1998, it was seen as the Italian automaker’s answer to the BMW 5 series. It’s about as big a five and it was very much a premium “executive sedan” and sold very well during its production run from 1998 through 2007.

The replacement for Alfa Romeo’s flagship is in the works and should hit the streets by late 2011. Dubbed the 169, the new sedan picks up more than a few styling cues from current Alfa models, such as the new Mito hatchback and upcoming Milano. Like the 166 before it, Alfa has aimed the 169 at a big imaginary bull’s-eye on the trunk like of the current BMW 5-Series. Oh, and Mercedes-Benz E-Class, and Cadillac CTS? You’re on notice too.

It seems that although the 166 was much loved, it did have one irksome feature: It was a front driver. The incoming 169 seems to be addressing that flaw, thanks to corporate parent Fiat\’s new partnership with Chrysler. The new 169 is expected to borrow the rear-wheel drive platform destined for the upcoming 2011 Chrysler 300 redesign. Going with a RWD setup will, as I’m sure you all know, guarantee a more dynamic driving experience.

In addition to also getting new and improved suspension settings unique to the rear-drive 169, there are also very interesting rumors of which engines the North American version will get. There is talk of the 450 horsepower 4.7-liter V-8 from the Alfa Romeo 8C Competizione. Yes, yes that would do nicely, thank you, not to mention that using that mill for a high-performance GTA variant could take a serious run at cars like BMW’s M5 and Mercedes’ E63 AMG.

All of this news that the new 169 will be working off of the upcoming 300 also jives with reports that Fiat is going to build two new sedans based on the next-gen Chrysler 300 platform at Bertone’s former plant in Italy. It has long been rumored that the second model will be another luxury sedan that will be the next Lancia Thesis.

But wait, there’s more. There’s rumors that the 169 could even be built in North America to keep the price of local versions down. Pricing is expected to start around $40,000 in the U.S.