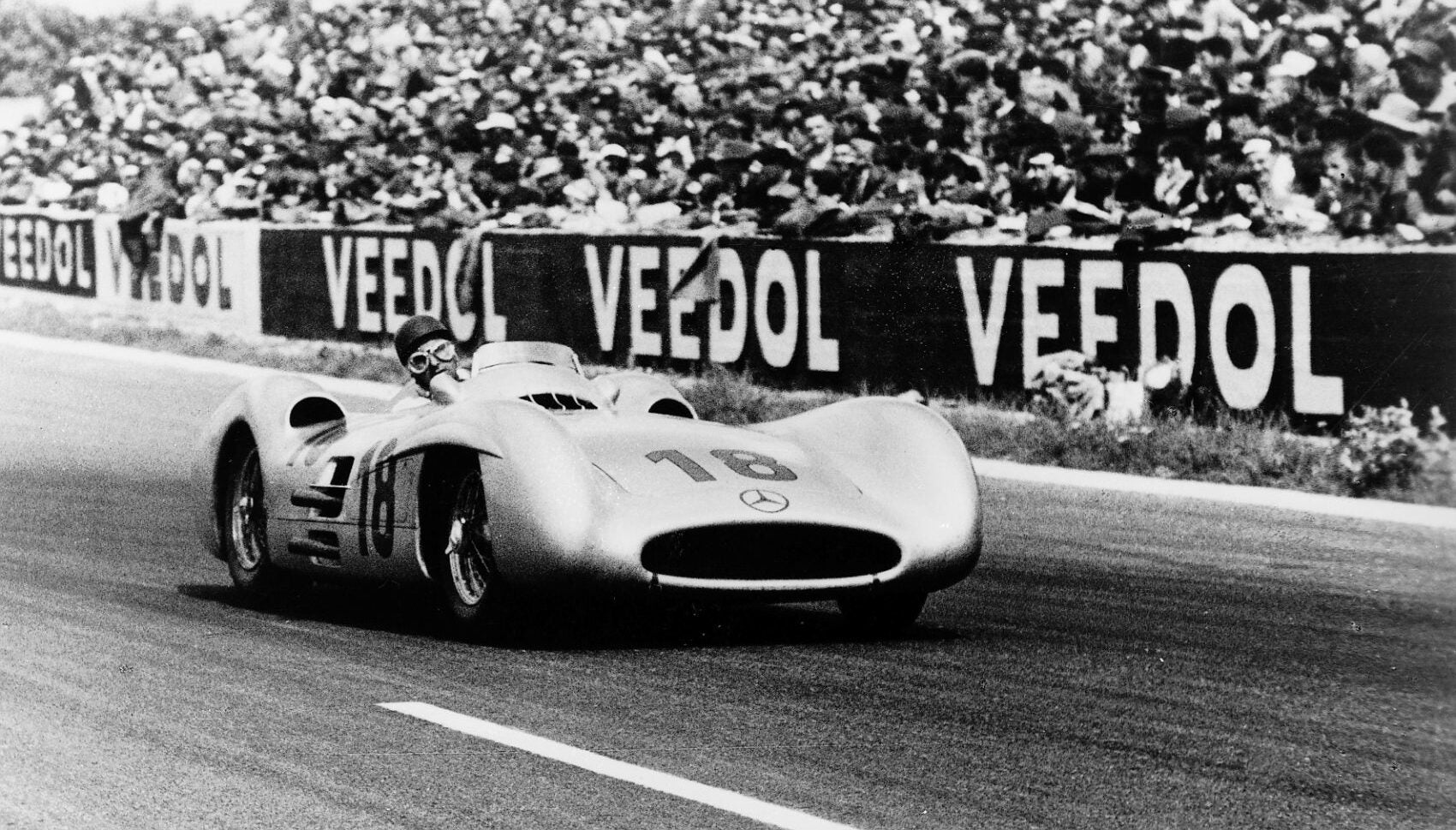 Affiliate Disclosure: Automoblog and its partners may be compensated if you purchase this book through the links provided here. Our Book Garage series showcases what every enthusiast should add to their library.

Two Summers is a delightful book that tells the tale of the Mercedes Grand Prix team when they were at the height of their resurgence in the 1950s. Run by one of racing’s great team managers, and driven by some of the all-time greats, the Mercedes-Benz W 196 is one of the benchmarks in racing history, and this is its story.

There’s a wonderful little picture on page 21 of Two Summers that encapsulates both this book and the world in which it’s set. Two unnamed Mercedes mechanics are at the rear of a silver streamliner, painting by hand the number “22” on the tail of Hans Herrmann’s W 196.

Long gone are the days of numbers painted on cars, let alone mechanics that were also, literally, letter-perfect with a paintbrush. Today it’s all thin-film transfers calibrated just so for sponsor logos to read right on TV screens. Mechanics are technicians that seem to be working on flying saucers. And racers are more drivers then devil-may-care men like Juan Manuel Fangio and Stirling Moss.

The mid-1950s were a staggeringly dangerous time in auto racing. The documentary film 1 shows how hazardous Grand Prix racing was in the early 1970s, but the 50s make it seem like a kiddy ride at the county fair. It’s not that drivers, designers, and teams wanted it that way; it was just, more or less, a natural confluence of events.

It took until 1950 for racing in Europe to get up and running again after World War II. The industrial base was mostly in ruins, about one in five people were killed, and the entire populace was seriously shell shocked after what they just lived through.

For competitors, the mindset was pretty much like it was in 1939 when hostilities broke out: Have a pint, have a cigarette, and have a go in whatever motor you might be able to find for a Sunday afternoon. Only by the mid-50s, things had changed, mechanically-speaking. Much was learned concerning internal combustion engines during the war. Likewise for esoteric subjects including metallurgy, rubber compounds, and braking systems.

There was also a particular stripe of man in the post-war era. These men flew fighter planes, served on navy ships, and saw Action with a capital “A.” And they wanted more. More Action. More close shaves. More opportunities to show that they had it; that they could roll the dice and come out on top.

As new technologies were brought to bear, as race cars became faster, as a new generation of drivers came on the scene eager to prove themselves, one car company emerged on top: Mercedes-Benz. The old adversary had returned to its dominant position at the top of the mountain.

Two Summers: The Mercedes-Benz W 196 R Racing Car is a wonderful telling of a tale well-known to us older gearheads, but the way author Robert Ackerson relays it seems fresh and new. I know how this ends. I know who won and who lost, and I still kept turning the pages. I also recognized many of the book’s photos, yet others were new to me. And all of them delightfully show off what we were dealing with at the time: pit complexes that were little more than filling stations; grandstands with zero crowd control; racers talking genially; and mechanics working on the fastest cars in the world in parking lots.

While Two Summers shows how Mercedes-Benz returned to utter domination, it also explains, obliquely, the great German firm’s fall. By 1955, nothing could stop Mercedes-Benz. They had it figured out, and only fate could stop them from winning as much as they pleased, for as long as they wanted.

Fate stepped in on a warm June afternoon in central France when a Mercedes-Benz sports car went into the grandstands at Le Mans, killing 82 people in an instant. That the car was driven by a Frenchman; and the accident a series of mistakes and missteps that cascaded one upon another was of little interest to the world at large and racing in its microcosm. As far as everyone was concerned, a German car, run by a German team, had killed nearly 100 people in a violent swath of burning magnesium and kinetic energy almost 10 years to the day after the end of humanity’s most brutal conflict with the Germans.

It was, in short, all a bit too much for everyone to handle.

There was talk of banning racing outright. Switzerland did. England and Ireland banned racing on public roads. AAA stopped its extended running management of American racing entirely. Everyone had a serious rethink with Mercedes-Benz calling it quits at the end of the year saying: “The board of directors has decided, after the most careful consideration, to withdraw from motor racing for several years.”

Great Story No Matter The Time

But for two summers, Mercedes-Benz was at the top, when racing was arguably at its most perilous. Robert Ackerson’s book tells this story wonderfully, and every gearhead out there should own a copy. If you’re older, Two Summers will solidify what you know. If you’re young, Two Summers will show you what racing was like back when this modern world was starting.

Robert Ackerson lives in Schenevus, NY, a small village near Cooperstown, the home of the National Baseball Hall of Fame. Formerly a public school teacher, he now writes on a wide variety of automotive topics. He is the author of Veloce Publications two-volume history of the Ford F100 and F-150 pickup, and new History of the Chrysler 300. His exposure and interest in the CJ Jeep dates back to explorations of old trails in the foothills of the Catskill Mountains with a 1946 CJ-2A.