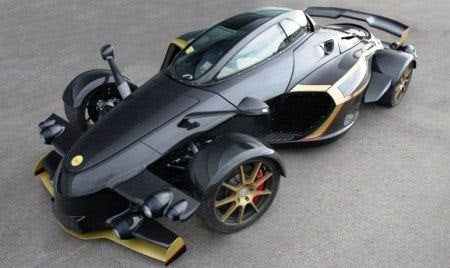 Are the Ariel Atom V8 and Caterham Seven RS not fast enough for you? Well, you’re crazy, but we might have the answer for you.

A relatively unknown Spanish company called Tramontana has developed a monster. They took a Mercedes-sourced twin-turbo 5.5-liter V12 producing 720 horsepower and placed it in a completely carbon fiber chassis, then covered it in a body made completely from…you got it…carbon fiber.

I’ll give you a minute to let that sink in…

Alright, we have a huge 720 horsepower engine sitting in a frame that weighs as much as a shoe.

The total weight of the car is actually rather high for its size, however, at 2,795 lbs. I’m sure most of that is the engine.

Even the 20-inch wheels are made from carbon fiber (and magnesium) to keep weight down.

Now, that actual performance numbers aren’t quite what I expected. According to Tramontana, the 0-62 mph time of the car is 3.6 seconds, and the top speed is 201 mph.

While these numbers are generally very fast, I admit I did expect faster times than that considering the power-to-weight ratio is insanely high.

The Tramontana is controlled via a 6-speed sequential gearbox and sticks to the road courtesy of a 4-wheel independent Ohlins adjustable suspension.

But for a self-proclaimed “combination of a Formula 1 racing car and a fighter jet,” this might just be the perfect track car.