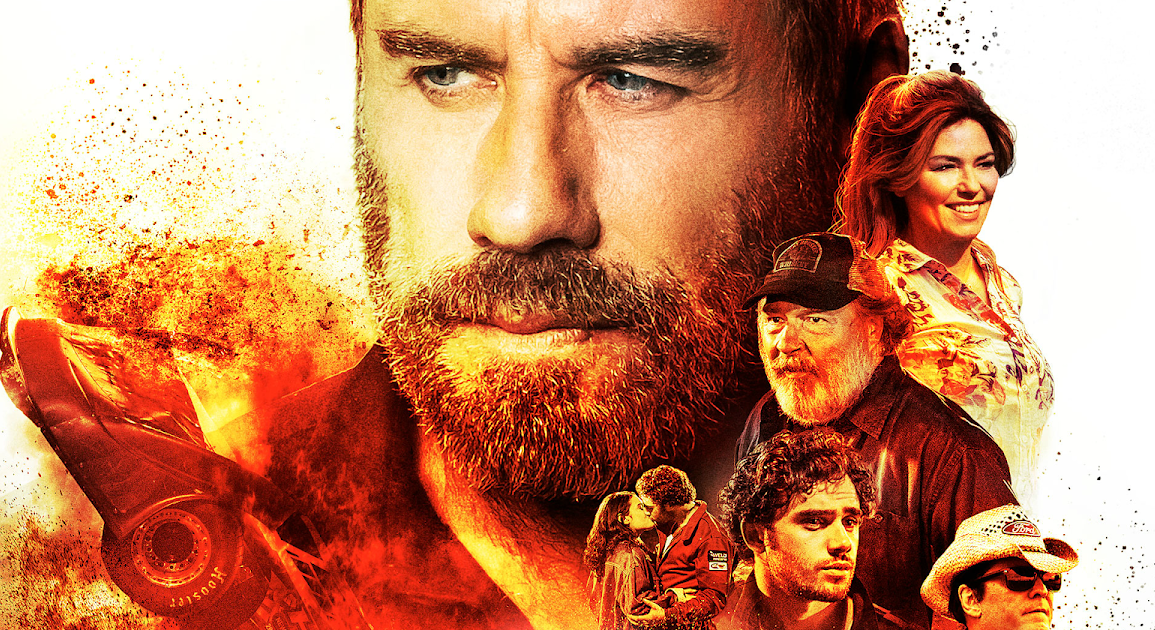 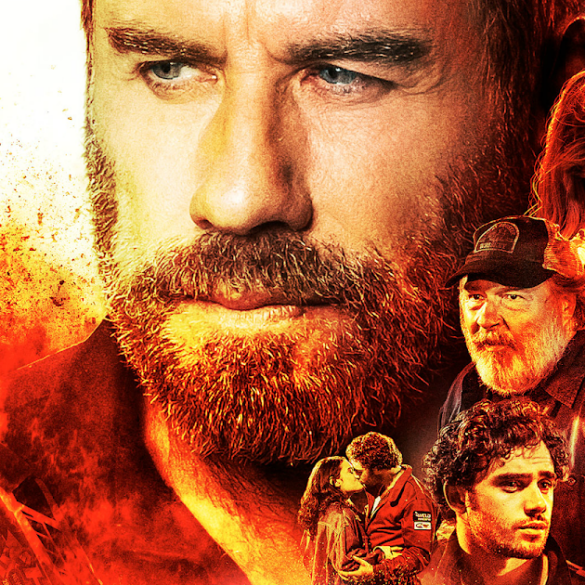 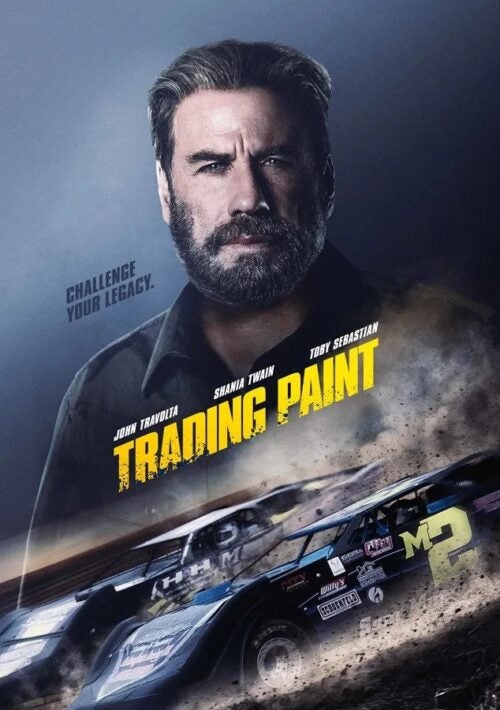 Not five minutes into Trading Paint, the clichés are flying thick and heavy: track announcer expositions, up-and-coming driver, old hand running the team, vengeful antagonist, flashback to romantic loss, the whole enchilada. And then, we cut to a quiet aerial scene of a lake. “Bass fishing?!” I ask out loud.

We cut to our stars, John Travolta and Shania Twain, sitting on a dock in the early morning light, just commencing to fish. I sigh and hit pause. I check the running time. 87 minutes. I sigh again. “OK. Here we go.” I hit play.

Sam Munroe (John Travolta) and his son Cam (Toby Sebastian) are a father and son duo racing late model modifieds at the Talladega Short Track. Sam is a local racing legend who now supports his son’s career as a crew chief and mentor. Sam is also dating divorcee Becca (Shania Twain). Despite Cam’s obvious talent as a racer, he’s held back by inferior equipment and lack of funds.

Cam grows frustrated and joins the team of Sam’s arch-rival Linsky (Michael Madsen). When Cam tells his pop about joining Linsky, Sam flies into a rage and warns him that Linsky is a cheater and not to be trusted. Sam then fires his own son on the spot.

In response, the elder Munroe spends the night drinking, then brings himself out of retirement the following morning to restore his status as a champion. Everyone thinks Sam is crazy and tries to talk him out of mounting a comeback, but he quickly shows everyone his knowledge and abilities are still there, and he wins several races.

Of course, Linsky feels threatened by the resurgent Sam and asks Cam to crash his father out intentionally. Cam does not acquiesce to Linsky’s wishes, so Linsky has another racer stage a crash that results in Sam plowing into Cam’s car, thus putting him out of racing for several months. During the convalescence, Sam and Cam mend fences and make peace before the final showdown with Linsky.

The trailer makes it all look way more exciting than it actually is. If there ever was a flop, Trading Paint is it. The film holds a solid zero percent rating on Rotten Tomatoes, which isn’t surprising considering Travolta landed the Worst Actor award for the role of Sam Munroe at the 40th Golden Raspberry Awards. We simply have to deal with the incontrovertible artistic fact that Travolta peaked at Vinnie Barbarino.

Gary Gerani and Craig R. Welch co-wrote the script. This is the only writing credit for Mr. Welch, but it’s worth noting that the more significant of Gerani’s six writing credits include Confessions of a Teenage Supergirl and Vampirella. As if I need to go into this in any detail, the script for Trading Paint is terrible. It has literally every cliché in the racing movie book and offers nothing as far as insight into this world. Honestly, that’s the real shame here. There are always good stories on any local racing scene, and Trading Paint didn’t tell any of them.

As a film, Trading Paint doesn’t work on any level. Travolta and Twain would be the two biggest draws to the average person, but the by-the-numbers script hamstrings them both. Travolta can be charismatic given the right role and director (Pulp Fiction, for example), and Shania Twain has that hyper-good looking thing going for her, but that’s not enough to carry this movie. To say Twain sounds like she is reading off cue cards would be charitable.

Michael Madsen is good as Linsky, but it’s more or less something we’ve seen him do a thousand times. Madsen excels at playing gruff, short-tempered, and easily provoked characters. Linsky is just like Madsen’s character of Budd in Kill Bill, only here he’s a racer and Ford dealer. So, in the end, even Madsen’s performance is off-the-rack generic and unoriginal as everything else in Trading Paint.

Should You Watch Trading Paint?

The funny thing is, like so many racing movies since time began, Trading Paint keeps up the old axiom. The film is terrible, but the racing and the cars are usually worth the price of admission. At least in this regard, Trading Paint gives us a little something. The racing is late model modified, and we see action in rural garages and race shops, and that’s at least enjoyable. However, it will be sad if Trading Paint ends up being the only movie about this sub-sub-genre of racing. Maybe someone who is a fan will see this and get motivated to make the movie that local short-track racing deserves.