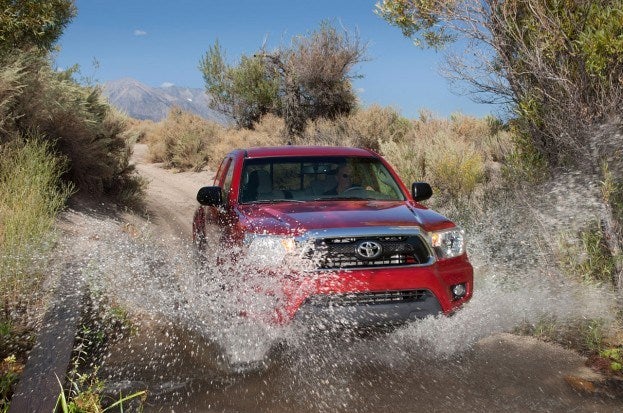 The compact and mid-size truck segment in the United States is pretty uncompetitive; most would agree it smaller trucks have taken a definite back seat to the full-size ones. It mostly has to do with volume – the full-size trucks are where it is at. As such, the segment is pretty stagnant – Ford is discontinuing the ancient Ranger, the Chevrolet Colorado (and GMC Canyon) have been left without any updates, and the same holds true for the Dodge Dakota. The Toyota Tacoma is the best-selling and freshest truck in the segment. Today, Toyota has released a pre-production performance version in Texas. What better place to release a new truck than Texas? It is pretty much as truck-country as you can get, which is why Toyota builds trucks there at its San Antonio plant. While the Tacoma isn’t a real competitor to the Raptor, you’ve got to give Ford credit for reviving interest in performance trucks with that truck. This more extreme Tacoma has been developed by the Toyota Racing Development (TRD) division, and it is dubbed the Tacoma T|X (Tacoma Extreme) Baja Series. Toyota is currently planning on offering the Baja Series line on the Tacoma Access and Double Cab 4×4 models equipped with the TRD Off-Road Package. The changes are all off-road focused – The front suspension has been upgraded with 60 mm piston Bilstein race shocks and a one inch increase in wheel travel. Other upgrades beneath the skin include a TRD cat-back exhaust and TRD coil springs with a protective zinc-plated body front and rear. The rear suspension has new 50 mm piston Bilstein race shocks that include a remote reservoir to increase shock oil capacity. Rear wheel travel is increased by 1.5 inches.

Power comes from the Tacoma’s 4.0-liter V-6 that is mated to your choice of a five-speed automatic or six-speed manual. The Baja Series builds on some of the other features of the existing TRD Off-Road package, including Active Traction Control (A-TRAC), Hill-Start Assist Control (HAC), Downhill Assist Control (DAC) and an electronically-controlled locking rear differential. The package will be offered on the 2012 model Tacoma, which has recently been freshened with a new front fascia, headlights, bumper, hood and grille, along with an updated interior. The Tacoma T|X Baja Series is set to go on sale next Spring.