A car that enthusiasts have been waiting on for a long time has arrived. For quite some time, rumors have swirled about a Toyota/Subaru partnership over a small rear-wheel drive sports car. Toyota and Subaru are in cooperation, and both have been looking for a new performance model to bring some excitement into their lineups.

For Toyota in particular, the need is urgent. The company has virtually nothing to offer enthusiasts, and its older trending clientele has caused head executives to conclude the lineup needs to offer a more engaging driving experience, as well as more compelling design. It’s about time!

After being talked about endlessly and teased with a variety of concepts, the Toyota sports car has been made official at the Tokyo Auto Show, dubbed the GT 86. The GT 86 was just launched in the United Kingdom. Here in the United States, the powers at be decided the car would be sold under the youth-oriented Scion brand. 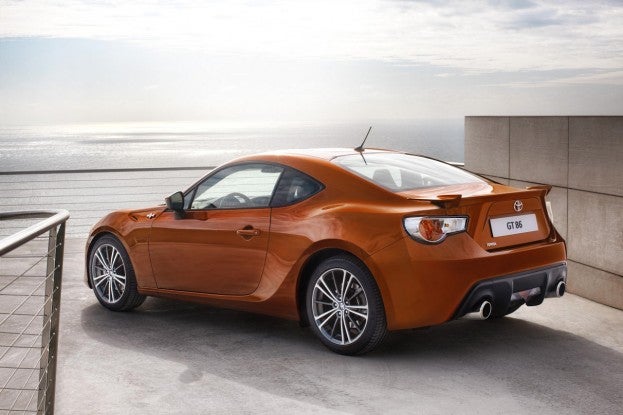 We think the Toyota brand needs the excitement, but we digress. WIth this car, Toyota has proclaimed that “passion is back.” Stylistically, the car looks similar to what we have been seeing for a few years. The front end has horizontal headlights and a sculpted, downward pointing front end that lacks a grille in between the headlights. That sets it apart a bit. Instead, it has a large lower grille.

There are haunches around the back, with some clear taillights lenses integrated in. The rear-wheel drive proportions are the nice thing; the details are a bit immature. Boy racer? Kind of. It will probably translate better in person. We’re guessing most will care more about the GT-86’s driving experience though.

Under the hood is a 2.0-liter boxer four-cylinder with direct-injection; it is naturally-aspirated and makes 197 horsepower. Some say that is on the low side, but the point is the GT-86 is a blank canvas for those to make it their own; modify, tune, etc. If its lightweight (a big if) the numbers shouldn’t be too shabby out of the box either. The engine is mated to your choice of a six-speed manual or automatic transmission.

With a 53:47 weight distribution, Toyota says the car has “precise, instant response to the smallest throttle and steering inputs.” That is all meant to appeal “to those for whom driving is a passion, not a necessity.” Toyota is hoping the car catches on in a big way with enthusiasts at a grass roots level. To us it seems like a throwback; a minimal use of computerization and a focus on the driver being in connection with the road. Do you think it lives up to the hype? Let us know in the comments, and check out our gallery of the GT-86 below.