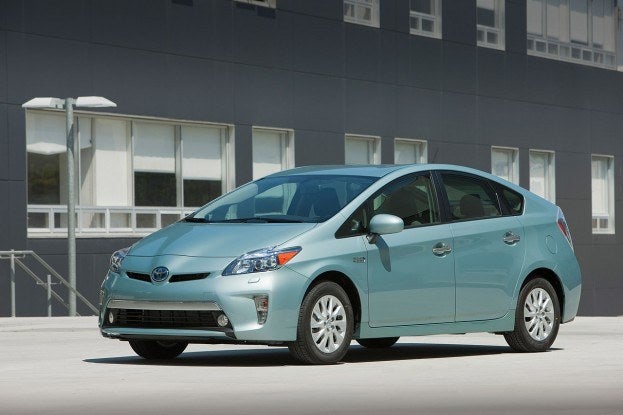 The Toyota Prius family is growing – in fact some think it could one day supplant the Camry as Toyota’s best-selling car. To capitalize on the success of the original, Toyota is introducing the larger Prius V, as well as a new smaller model that will slot in below the current car. The smaller model has yet to be released. Pricing for the Prius V has been released today, and also new information on a much-awaited (by some) plug-in model. Late to the game? A bit, but they are getting there.

The Chevrolet Volt has stolen a lot of thunder from the Prius in the media coverage department, but Prius sales are still continuing strong. The biggest selling point of the Volt is its ability to travel around 40-50 miles under purely electric power, something the Prius has always lacked. The plug-in aims to retain some of those buyers and offer the large existing pool of Prius customers an enhanced option from Toyota. The plug-in model gains a new lithium-ion battery pack, ditching the older NIMH technology of the standard cars. It is 4.4 kWh in capacity and weighs 176 pounds.

What’s clear is that the General Motors Voltec system is more advanced; the Prius Plug-in only gets 15 miles of range on purely electric power, up to a speed of 62 miles-per-hour. Still, it is an improvement over the standard car. Of course, it does come at a price though. The Prius plug-in’s price starts at $32,000 for the base model, going up to $39,525 for the loaded advance models.

Both cars qualify for a $2,500 tax credit. Deliveries in fourteen launch states start in spring of next year, with availability in all 50 states beginning in 2013. The Prius V starts at $26,400 going up to $29,990 and it arrives at dealers this October. Toyota got caught a little flat-footed by the Volt and the recent surge in electric car interest; the Prius plug-in and the Tesla partnership is an effort to respond to that.