With the doors officially opening to the public of the Paris Motor Show this Sunday, some automakers have held off until the last minute to deal their ace design for the event. Intending to garner the acclaim of ‘saving the best for last’, Jaguar chose the Paris show’s first press day to unveil their radical electric performance car concept called the C-X75.

The C-X75 name understandably pays homage to the 75 years of the Jaguar brand, an accomplishment for which the British luxury brand has not been shy about advertising nor should be ashamed to pride. Jaguar has already produced limited edition XJ and XKR cars to commemorate their momentous anniversary, the C-X75 is the masterpiece to their celebration.

Since undergoing a takeover by India’s Tata Motors, Jaguar’s design studio has received the benefits of a revived motivation focused more a luxury car future. The Jaguar C-X75 concept continues on the path of styling reinvention moulded in advanced aluminum construction. A closed-cockpit design placing the cabin ahead of the powerplant, aerospace-inspired smooth contours are defeated only by side ducts and pronounced fender flaring. At 182.95 inches long and 79.52 inches wide, the C-X75 covers less of the road surface than the current Jaguar XK. 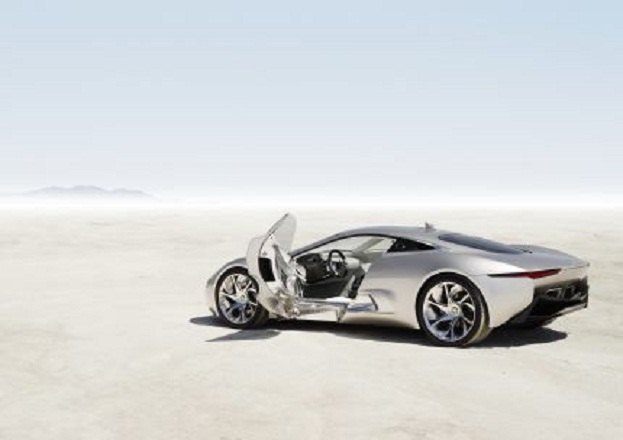 Though forward-thinking, some aspects of the Jaguar C-X75 are undeniably heritage-based touches. Firstly, the headlamp lens design screams the spirit of the C-Type and D-Type race cars while the same case can be made for the front fender flares. Hints to Jaguar’s XJ220 supercar are explicitly-telegraphed through the body lines of the C-X75 relating to the British company’s last great supercar.

As the interior casts a very luminescent entry thanks to the reflective surfaces and large windshield, the C-X75 is a clean, no nonsense design. The Jaguar C-X75’s steering wheel, instruments and pedals all place the driver in firm control of the vehicle. Speaking about firm, the two seats inside the C-X75 are fixed in position like a race car. High-resolution touch-screens provides the drive with all the interaction needed with the concept supercar which includes the center console-based Jaguar Co-Pilot display. Running off a lithium-ion battery pack, the Jaguar C-X75 achieves a distance of 68 miles before depletion. Realizing the distance on battery capacity provides a quite unusably short trip, Jaguar has conceived in a range extender making the C-X75 definitely not a conventional electric like the Tesla Roadster or Nissan Leaf. Pushing the maximum distance of the Jaguar C-X75 for up to 560 miles, the method for how this extra range is especially unique out-of-box thinking for a 21st century automobile.

Amounting to less than 3,000 pounds, the small aluminum supercar and 778 horsepower has a date with some stellar on-track performance numbers. Accelerating from 0 to 62 miles per hour in 3.4 seconds and hustling through the quarter-mile in a shocking 10.3 seconds, the Jaguar C-X75’s electric propulsion goes on to push to a 205 miles per hour top speed.

Like every concept car brought to the reality of an auto show floor, we remain uncertain how much the Jaguar C-X75 is casting a light to the possible future of road-going vehicles.