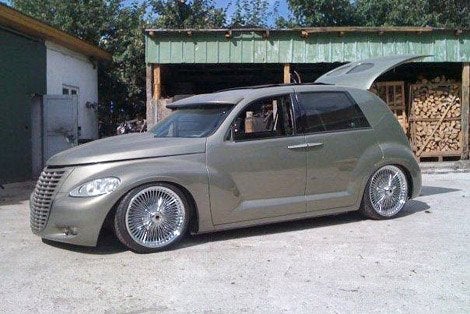 Since Main Man Chris is such a big fan for the PT Cruiser, how could I not cover this? One thing that’s interesting is how little customizing of the PT Cruiser I have seen over the car’s production run. S

aying that, what we do have here is heavily modified Chrysler PT Cruiser that is officially known as The Chrysler Groozer.

What’s going on here with the Groozer can best be called old school, and is, as you can see by the pictures, a work in progress. But in progress or no, there is a lot of work going into this ride.

The nameless owner/builder of the Groozer has taken on such heavy tasks as turning the rear doors around and converting them to suicide doors. That’s not so easy to accomplish, and the level of work seems quite high. He has also fabbed up a custom rear tailgate with a split rear window.

A nice retro touch, and another big bite to chew, but sadly, this mod looks great from some angles, and clumsy from others. It could just be the shots though. Lord knows I’ve seen cars in the real world that look 1000% better than the way they photographed.

Other mods include unique LED tail lamps that are nicely Frenched (another old school nod you only see in the Rod and Lead Sled world, if at all).

He also reworked the whole rear fascia, the hood and looks like he did tons of sheet metal work around the C-column.

There is also some stuff you can’t readily see, such as a full air suspension system which allow the Groozer to go the low rider route. Also in that same vein are the wheels. They look to be Dayton hundred spokes, but I can’t be sure (always go with Daytons, fabulous wheels, but very expensive).

Said spokers 18-inch in the front and 20-inch out the back. They look fantastic with all the other mods, very nicely integrated.

And other old school touch is the sliding canvas ragtop. Last time I saw something like that it was on a mid-60s Volkswagen product.

Which makes me wonder where the guy got the bits and pieces for the Groozer. Do they still make those things? Replacement parts, I suppose.

Anyway, this guy is doing great work, and it’s nice to see someone using the PT Cruiser as a blank canvas, I’m just surprised I haven’t seen it done more often.