The 2011 Ford Mustang Finally Gets Some Balls

Not only that, but the engines are routed through an outdated 5-speed auto or manual gearbox and get terrible fuel economy. The Mustang GT’s V8 gets a combined 18 mpg while the awful V6 is barely any better at 19 mpg (20 mpg with the manual.) It makes me wonder how they’ve managed to sell any V6 Mustangs in the last few years to anyone but rental car companies and image-whores. But now that’s all changed… 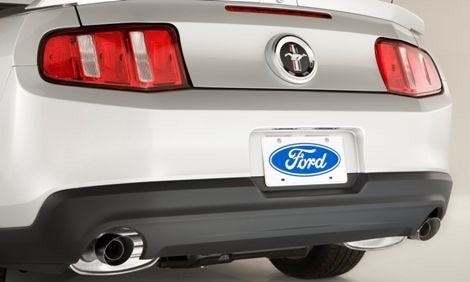 For 2011, Ford finally wised up and upgraded their V6 to a competitive level. The new 3.7-liter all-aluminum powerplant produces 305 horsepower and 280 lb-ft of torque – 95 hp and 40 lb-ft better than its predecessor.

Despite the engine’s smaller size, the new V6 is expected to get 30 mpg on the highway – 4 to 6 mpg better than the outgoing engine – thanks in part to the engine’s lighter weight (40 lbs lighter, in fact,) and a proper 6-speed auto or manual transmission.

Now, you may be saying to yourself, “Self, but now the V8 only has 10 more horsepower than the V6; who would buy the GT?” And you’d be right.

Well, now that Ford has their collective heads out of their ass, I expect to see an announcement within the next few months about an upgraded V8 engine in the GT trim. Here’s hoping the V8 exceeds 400 hp. 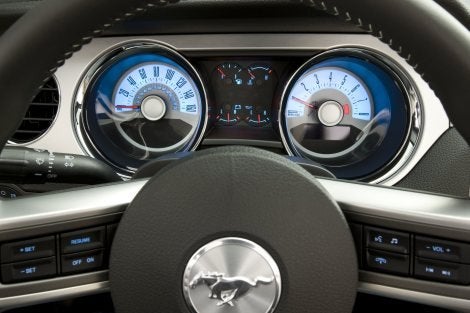 So, now we have a powerful V6 Mustang that can finally compete with other cars in its class. The 2011 Mustang will receive some other upgrades as well. In the engine bay, Ford added a cold-air intake, a new dual exhaust, and re-tuned the engine’s exhaust note.

I’m actually looking forward to getting into one. The 2011 Ford Mustang will also be available with a Performance Package, which adds an upgraded suspension and chassis stiffening, bigger 19-inch wheels, a 3.31 rear axle ratio, stickier tires, sport mode, and brakes from a Mustang GT.

I’m glad to see the Mustang back in the game for next year. While the handling still leaves something to be desired (though that might be improved for 2011 too,) it’s a lighter car than the Camaro.

Now that it and the Camaro are neck-and-neck in terms of power, it will be interesting to see Chevy’s next move. And don’t forget about the superb 2010 Hyundai Genesis Coupe which sports a 3.8-liter, 306 hp V6 and is more nimble than either of the two.