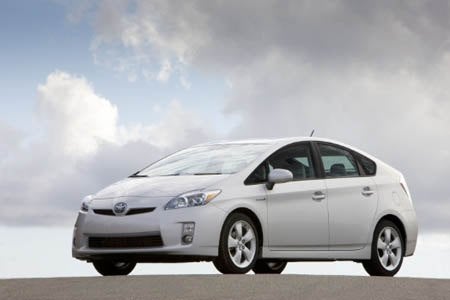 Well here it is, the much ballyhooed and hyped next gen Prius hybrid form Toyota, coming in 2010 to save you, the planet, your gas budget and all of that, right? Right?

We’ll see when we take a closer look at what the new Prius hybrid has to say for itself, look over the shots, and review the video and all the rest after the jump.

First, let’s just get the usual stuff out of the way for those of you that have been living in a snow cave near the polar cap: The Toyota Prius sort of knocked the auto world sideways when it first appeared, being a half-way step between a gasoline engined car and an all electric ride. The car you see here, the 2010 Toyota Prius is the third gen of the car for North America. What makes it so special? What’s in Gen III?

First off, better mileage. The first-generation Prius, got around 41 EPA combined mpg, while the second gen put in 46 mpg, combined city/highway.

Using a combination of technologies, fuel efficiency was increased to an estimated 50 miles per gallon for the new Prius. Not bad, huh? And it’s actually even more impressive when you realize that the 2010 Prius uses a bigger IC engine. A larger and more powerful 1.8-liter Atkinson-cycle, four-cylinder engine to be specific.

Contrary to what you’d think, the larger engine actually helps improve highway mileage. “By making more torque, the new engine can run at lower average rpm on the highway. When operating at lower rpm, the new engine uses less fuel. Mileage is especially improved in cold-start conditions and at higher speeds.”

The real trick stuff, and most of the gearhead improvements are in the Hybrid portion of the new Prius (as you would expect).

The hybrid drive system in the 2010 Prius, Toyota calls it the Hybrid Synergy Drive, is 90 percent newly-developed with significant improvements over previous models. Let’s just list them:

Speaking of the body, Toyota has refined, rather than revolutionized that aspect of the 2010 Prius as well. It still looks halfway between a car and something from DARPA, but there have been all manner of refinements to the exterior.

For starters, the 2010 Prius will boast the lowest Cd (that’s coefficient of drag), coming in at 0.25, or essentially one quarter the drag of two license plates. Toyota has massaged the body, front and rear, top and bottom – paying particular attention to underbody aerodynamics.

And up on the roof? Solar cells!

The system prevents the interior air temperature from rising while the vehicle is parked, making the cool-down time shorter when the driver returns to the vehicle, thus reducing the use of air conditioning. Smart!

The 2010 Prius is the first car in the world to have this tech, and it can be remotely operated, so the driver can adjust the interior temperature for comfort before getting in the car.