Trucks have a fundamental toughness unlike any other vehicle. They can tow big trailers, haul loads of dirt, plow through snow, and provide a driver some nice creature comforts while doing so. Competition between trucks is no secret – just talk to a Ford guy and then to a Chevy guy!

How do you determine the best out of such a talented crop? It might be near impossible but The Fast Lane Truck has leveled the playing field with their 2016 Gold Hitch Award recipients.

TFLtruck rates mid-size, half-ton, heavy-duty, and truck-based full-size SUVs on their ability to perform in the most brutal conditions. Nearly 4 million truck buyers consult the features, news, and reviews found on TFLtruck. Six Gold Hitch Awards were presented this year.

Table of Contents show
Criteria
Top of the Mountain

The benchmark for towing is based on the Ike Gauntlet. The Ike Gauntlet is an extreme towing and performance test that easily weeds out any lesser competition. The test loop consists of an 8-mile stretch of I-70 between Dillon, Colorado (9,111 feet above sea level) and the Eisenhower/Johnson tunnels (Continental Divide at 11,158 feet above sea level). The grade reaches 7%, the maximum allowed on a U.S. Interstate.

Oh, and the trucks are loaded with trailers near their maximum towing capacity.

In addition to the Ike Gauntlet, TFLtruck has an off-road challenge known as “Gold Mine Hill.” Granted, there is gold to be had in the form of bragging rights – that is, if the truck will handle the three essential components: the accent, momentum ending corner, and articulation accent. It sounds crazy but it can be done.

“The Gold Mine Hill obstacle is not impossible,” said Roman Mica, TFLtruck Editor, Host, and Producer. “The challenge is for participating automakers to build a vehicle that can be effective and easy to navigate up a difficult obstacle.”

Top of the Mountain

TFLtruck team used the Ike Gauntlet scoring system to determine winners for each category. All five category winners were then eligible for the title of 2016 Gold Hitch Truck of the Year, but the GMC Canyon Duramax Diesel ultimately took it home.

Truck buyers have high demands when they purchase. The jobs they need their trucks for are extensive and require a truck function at full capacity daily.

Competitions like the one TFLtruck hosts do wonders showing customers what they can expect when they put down their hard-earned money for a pickup.

“Maximum-effort testing is what the Ike Gauntlet is all about. High elevation, steep grades, and heavy loads certainly challenge all trucks that participate,” said Andre Smirnov, TFLtruck Producer and Managing Editor. “Now, with our new scoring system, our viewers can clearly see how these vehicles performed and compared.”

What is your favorite truck on the list above? 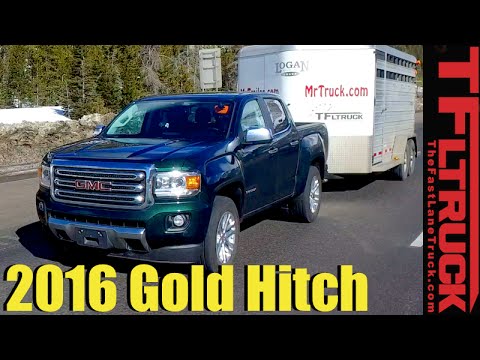