Supercar Superbuild kicks off its second season this Sunday (January 22nd) on the Smithsonian Channel. The cameras go behind the scenes, revealing the high-stakes gambles, engineering challenges, impossible deadlines, clandestine meetings, and years of sacrifice designers and craftspeople face to bring the world’s most incredible vehicles to life. Those who enjoy cars and appreciate history will definitely be fascinated by Supercar Superbuild.

The second season will expose viewers to Alfa Romeo, Rolls Royce, Jaguar, Porsche, and Audi, among others. This season, those and other individual automakers and their cars are examined thoroughly. From the mechanical specifications and design concepts, to the manufacturing and technology aspects, nothing is left untouched. Cars like the Rolls Royce Wraith, a near $300,000 luxury machine, are featured in full detail. Unique vehicle assembly characteristics are revealed, like how it takes nearly a football field worth of aluminum welds for an Audi R8’s frame.

The archival footage and historical information is one of the most enjoyable parts of the show, and viewers will see plenty of both this season. Another highlight is how the cameras go inside the assembly plants to see firsthand where the action happens. Viewers meet the executives, artisans, designers, and engineers responsible for getting these unique cars from dream to reality.

The first of eight episodes this season details how Mercedes-AMG is taking on their rivals in the performance arena. Viewers see the brand’s extensive history, hear from Tobias Moers, Mercedes-AMG Chairman, and go inside the Sindelfingen factory in Germany, the largest Mercedes-Benz facility in the world. Later in the season, the cameras head to the Motor City, where the Chevy Camaro is a beloved fixture among American muscle cars; the final episode of the season tells the story of the world’s first “blue-collar sports car.”

Supercar Superbuild premieres Sunday, January 21st at 9 p.m. ET/PT on the Smithsonian Channel. Below is a preview of Sunday’s episode. The snippet shows how Mercedes-AMG technicians build each engine by hand. 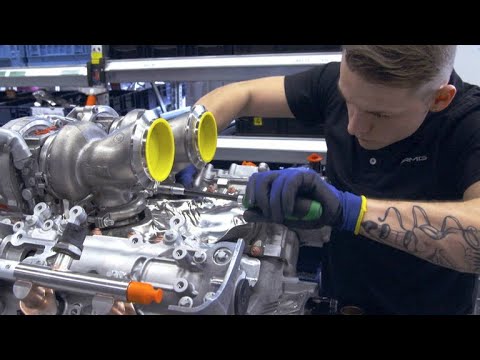