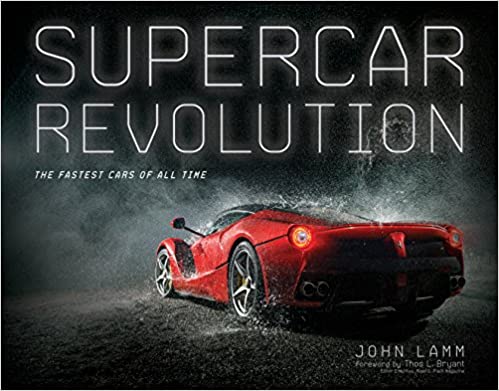 What exactly is a sports car? Not that long ago, within my lifetime, that was an easy question to answer. Now things become much more hazy. We no longer have just sports cars because now we have to add “supercars” into that discussion; and, as of late, “hypercars” are all over the automotive world. A gorgeous book by John Lamm, Supercar Revolution, traces the history of when sports cars became supercars, then became hypercars. In essence, it chronicles the battle for performance supremacy among these high-dollar machines.

Supercar Revolution: The Fastest Cars of All Time

This is all Lamborghini’s fault. Being the young upstart company they were, back in 1967, engineering conservatism was not in their vocabulary. It was clear from a performance standpoint a mid-engine car was the way to go. Yet a decade or so since John Cooper and Jack Brabham drove that point home, the high-end sports car world was still replete with big, front engine, rear-wheel drive choices.

The Lamborghini Miura blew that notion into a cocked hat. While Ferrari’s Daytona (really called the 365 GTB/4) was the king of the mountain, the Miura was a clean sheet of paper; new idea from new minds. It was also, arguably, the first supercar. It is with this event, starting with the old chestnut retelling of Enzo and Ferruccio’s fight about how to build sports cars, that our book in question – Supercar Revolution: The Fastest Cars of All Time, written by John Lamm – starts.

Lambo’s shot across the bow of Ferrari, and any other traditionally-oriented car maker of the time, sent us on the path to where we find ourselves today: staring down the barrel of something as strange and beautiful and terrible as a La Ferrari or a Porsche 918 or a McLaren P1. These are not sports cars. These are not even supercars (book title notwithstanding). No, these are hypercars. Cars of such technological aspiration and execution; such physics-bending performance that it is almost insane they sell them to anyone with a licence and a good check.

But here they are, out on the street; our streets, rolling among us; looking side-to-side, waiting, waiting for that next gap in traffic, that next open stretch of road, that next green light.

Related: This book about the Monaco Grand Prix captures it perfectly.

And this is a point Supercar Revolution drives home, page after page, and photo after photo. While we’re on the subject: Dig these shots man! The photos within the 240 page book are gorgeous art shots of two types. Either they are in-studio photos set against a black limbo background; or they’re outdoor, in situ shots of staggeringly-beautiful cars poised on race tracks, or parked just so out in front of villas of olde, or gardens verdant, or race tracks beckoning. You’ve seen Top Gear, right? The BBC program is known (primarily) for two things: doing foolishly-entertaining stuff with cars, and two – really good photography. Supercar Revolution is like the second, only in still form.

The horrible expectation is that with both the subject matter and the glorious photography, evidenced by the cover’s fantastic, rain-dappled three-quarter shot of a La Ferrari, this would be a coffee table book. A book that looks great, but has all the written flair of a vacuum cleaner manual. But no! This is not the case! Supercar Revolution is rather wonderfully-written by Lamm, a longtime notable car scribe and photographer. He is an alumnus of Road & Track and Motor Trend, and has created other nicely-done books and special pieces found hither and yon.

Indeed the R&T connection runs deep throughout Supercar Revolution. Not only does Lamm get his two cents in about high performance cars of the last 50 years, but he talks with a bunch of well-known gearheads, fellow writers, drivers, and outright racers. Jay Leno gives his opinion here and there, pipe-hitting champions like Phil Hill and Paul Frère are mentioned; René Dreyfus gets a shot. He even gives space to Jerry Wiegert, that half-huckster/hudry-gurdy man that gave (or said he was going to give) the world the Vector Aeromotive W2.

Pride of The Coffee Table

It’s a really good book, in both words and pictures, and the downsides are pretty minimal. One is how the cars covered get more frequent as time gets closer to our present day – but that just reflects how there are more super and hyper cars available now. Consider Ferrari, Porsche, Lamborghini, and Aston Martin; and boutique makers like Pagani, Bugatti, Saleen, and Ultima. The other miss is, apart from that gorgeous cover, the La Ferrari is not within the book itself. Sort of like writing a book about mountains and failing to mention Mount Everest.

But really, overall, Supercar Revolution is a great book. It will look good on your shelf or “left out” on your coffee table.

John Lamm is an award-winning automotive journalist and photographer who covers sports and racing cars for Road & Track. After attending a road race at Elkhart Lake, Wisconsin, he decided to become an automotive journalist and began his career with Motor Trend magazine in Los Angeles. In 1975, he moved to Road & Track, where he remains editor-at-large to this day. Lamm has won the International Motor Press Association’s Ken Purdy Award and the Motor Press Guild’s Dean Batchelor Award.