While Subaru is a derivative of Japan’s Fiji Heavy Industries, two of the auto brand’s most popular vehicles for the United States are built in Indiana. In the 2011 calendar year, the Subaru Outback was the highest-selling product in the United Stats line-up for the Japanese branded auto company. The Outback and Legacy model sales together account for nearly 68 percent of the vehicles Subaru sold last year making the pair important to the company’s success in the North America. Set for a first revealing to the US public at the 2012 New York International Auto Show, the Legacy sedan and Outback wagon will be a drastically refined presentation of Symmetrical All-Wheel Drive.

Two new look vehicle, the 2013 model year versions of the Legacy and Outback signifies an avenue of charge as Subaru continues to stride more as a premium vehicle brand in North America. New front-end styling on both cars incorporates a reorganized front end including a grille design derived from a Hybrid Tourer concept shown last year. In addition to the refreshments made to exterior, the 2013 Subaru Legacy and Outback models are equipped with a slew of high-technology enhancements.

Powering the base level 2013 Legacy and Outback vehicles, Subaru replaces the previous single overhead cam 2.5 liter Boxer engine with a more efficient double overhead cam powerplant layout. Providing three extra horsepower over the previous engine, the new 2.5 liter boxer-style engine now produces 173 horsepower through a broader driving range. Fitted with the improved 2.5 liter Boxer engine, the 2013 Subaru Legacy, fuel economy is projected towards the 32 mile per gallon range through highway driving with an average travel of 27 miles on a gallon of gasoline. Combined city and highway fuel economy falls by only a single mile per gallon when included with the Outback model. The 2.5 liter engine on the Subaru Legacy and Outback models will be coupled to what is said to be the automaker’s second-generation Lineartronic CVT (continuously variable transmission). Providing a six-speed manual driving mode, Subaru’s new Lineartronic CVT should feature improved mechanical response. 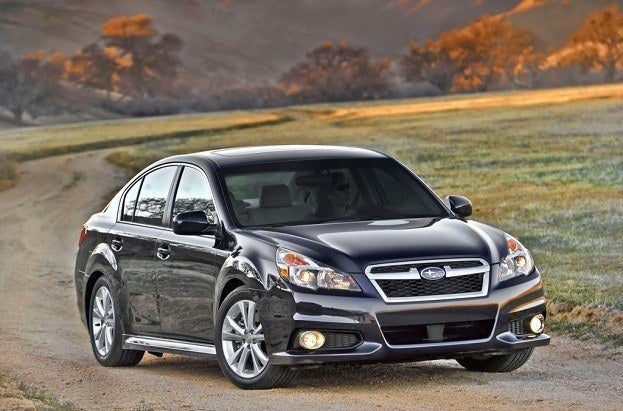 A more powerful 3.6 liter 6-cylinder Boxer engine is a carryover from the previous model year allowing up to 256 horsepower to be supplied through the all-wheel drive system found standard on all 2013 Subaru Legacy and Outback. 2013 model year Subaru Legacy and Outback models outfitted with the 3.6 liter engine will feature a conventional automatic transmission with five speeds. The major disappointment with the newly introduced line of Subaru vehicles is the exclusion of performance-suited, turbocharged Legacy 2.5 GT for 2013.

An improved ride is promised with the 2013 model year mid-sized Subaru cars. Said to be smoother than the predecessor vehicles, the new Legacy and Outback are also engineered to handle more proficiently using its all-wheel drive system. Suspension changes to the 2013 Subaru Legacy provides up to 40 percent less body roll than the 2012 model year model. Providing a more comfortable ride for both Subaru Legacy and Outback cars in 2013, the revised vehicles are also meant to exploit greater driving control.

Inside, Subaru’s latest halo technology is available on the new Outback and Legacy models providing an uncompromised array of anti-collision gadgets. Called the EyeSight driver-assist system, the technology uses wide-covering stereo camera for adaptive cruise control, lane departure and sway warning, pedestrian detection as well as pre-collision braking. EyeSight will be optional on the 2013 Legacy and 2013 Outback for what Subaru claims to be an affordable price in the United States.

Aside from the vast safety enhancements available inside of the 2013 Subaru Legacy and Outback, the more occupant-friendly interiors of both vehicles will feature upgraded amenities through base, Premium as well as the top-grade Limited trim levels. Standard equipment on 2013 Subaru Legacy and Outback models includes Bluetooth connectivity as well as 60/40 split rear seats. Upgrades available in 2013 include 10-way power driver’s seat, power moonroof, dual-zone automatic climate control and harman/kardon premium audio package.

Set to premiere in the Big Apple, Subaru’s 2013 model year Outback and Legacy rekindles the magic created by the original Subaru Outback premiering at the 1994 edition of the New York International Auto Show.