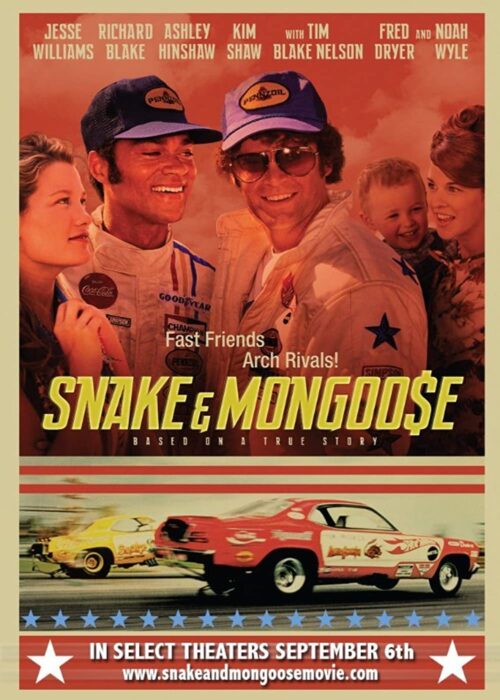 Snake & Mongoose is a somewhat overlooked movie that came out back in 2013. At the time, it only received a limited theatrical release, going straight to DVD in the spring of 2014. Snake & Mongoose had fallen off my radar since I first saw it, but I happened upon it again the other night while browsing through Tubi.

Back in the late 1960s, everything was moving fast and changing before our eyes. Racing was very much part of this time, and even the rather proscribed world of drag racing was not immune. One of the genres of drag racing that was completely new was funny car racing. This is a type of racing where production-looking bodies made of fiberglass were lowered onto rail dragsters of considerable power and performance.

Two of the rising stars in the world of funny car racing were Don Prudhomme and Tom McEwen. They didn’t start as great rivals; they were actually kind of buddies in the tight-knit and insular world of drag racing, or at least buddies as far as direct competitors could be. Nevertheless, their rivalry is considered one of the best in the history of the National Hot Rod Association (NHRA).

Snake & Mongoose centers around Prudhomme, a young California gearhead who desires to go fast but lacks the cash to do it. It sounds like a pretty familiar story because it is a pretty familiar story. There’s a small percentage rich enough to afford our addiction to horsepower, but nobody in this movie (or here at Automoblog) fits that description.

So, when Prudhomme could afford it, he’d go drag racing. When he couldn’t, he worked in his dad’s body shop. Something like this also sounds pretty familiar since many racers start from humble beginnings working in and around cars first and competing with them later. However, several things made Don different. He was one of the first guys to hit on the brilliant idea of having someone else pay for you to go racing. Sponsorship, in other words, as it’s now known.

Prudhomme hits on the bright idea of getting Hot Wheels to sponsor not just his racing team but McEwen’s team as well, pitching them as a matched set that will make for great press. There’s a fantastic scene where he first tells the idea to McEwan, who responds, “Toy cars?! Are you nuts?” No, Tom Prudhomme is a friggin’ genius. He was right, absolutely right. It was a perfect fit for Mattel, the makers of Hot Wheels.

It also ushered in something near and dear to literally every gearhead I know: collecting die-cast toy cars. Or, at the very least, having a few of them sitting around. Think about it for a second. Have you ever seen a gearhead, any gearhead, that doesn’t have at least a few little metal cars in their office? And if you look at them, you’ll see they are pretty accurate; they look right, have the right kind of markings and stuff like that. Basically, we have Arthur Spear, then Hot Wheels brand manager and later Chairman of Mattel, to thank for that. But we also have Prudhomme to thank for popularizing it.

The cast in Snake & Mongoose is particularly strong. It stars Jesse Williams as Don “The Snake” Prudhomme and Richard Blake as Tom “The Mongoose” McEwen. Williams, best known for his role in Grey’s Anatomy, is right on the money as Prudhomme. He has that same dark complexion with piercing blue eyes that the real Prudhomme has. Both Williams and Blake have natural chemistry for the sort of Mutt and Jeff, Bert and Ernie relationship the two real people had; one outgoing, the other more reserved; one more of a showoff, one more of a ladies man.

In addition to getting the vibe of 1969 SoCal burger joints and corporate offices, Snake & Mongoose nails the world of professional drag racing back then. Seriously, look at some old YouTube clips from the drags at Pomona in the 60s, then watch Snake & Mongoose, and tell me this Hollywood movie isn’t a dead-on bull’s eye. It’s probably even a movie that non-car people will enjoy. But if you end up getting a bunch of Hot Wheels tracks and cars and start racing in your living room, that’s on you. You can’t blame me.